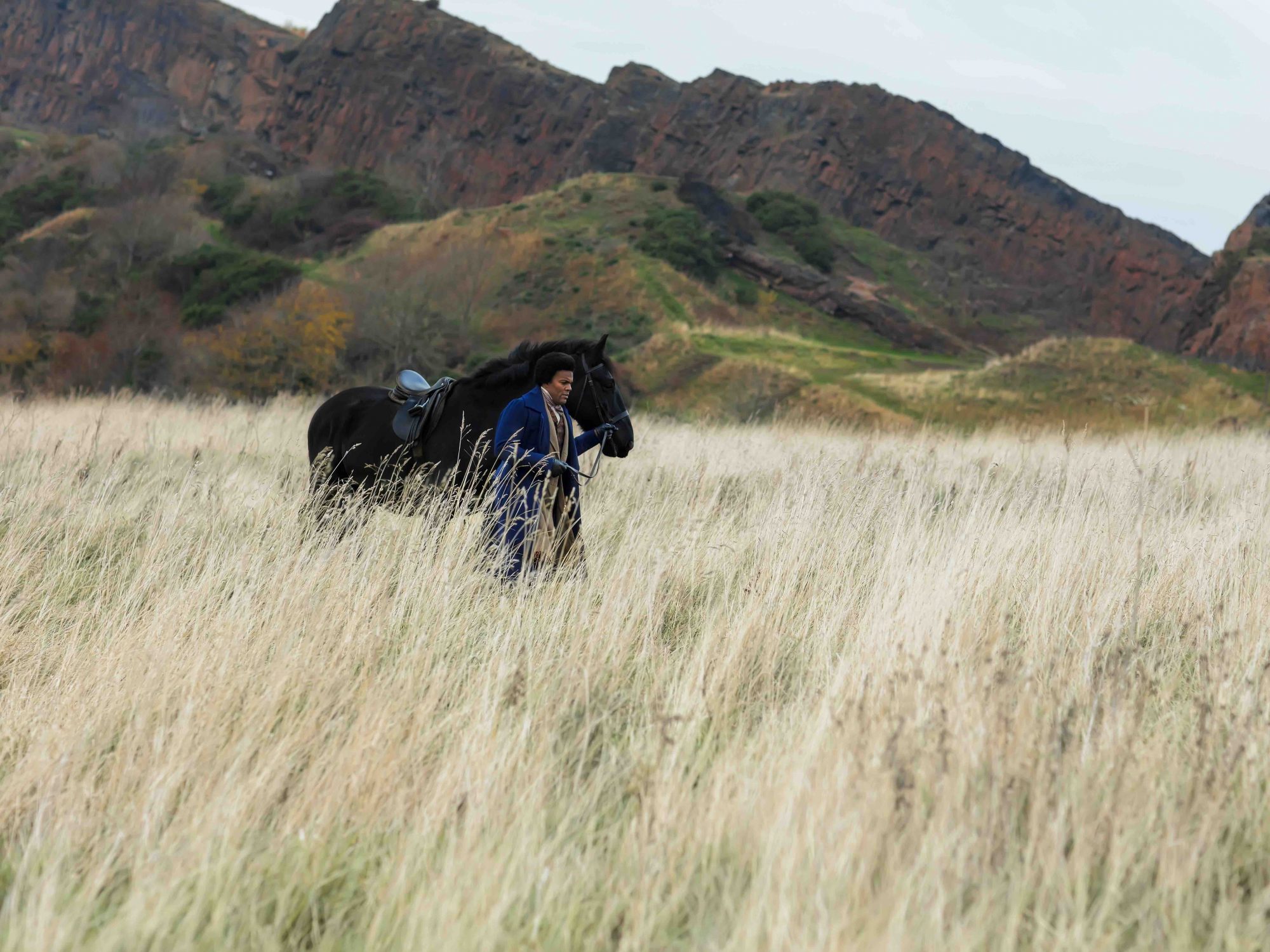 Lessons of the Hour

Galerie Ron Mandos proudly presents Lessons of the Hour by Isaac Julien CBE RA. This solo exhibition by the artist features the photographs of Lessons of the Hour and is the worldwide premiere of the single screen film from 2019. The exhibition also includes Julien’s first film Who Killed Colin Roach? from 1983. Both works prophetically resonate with the current debates around Black Lives Matter and question our relationship to abolitionism and histories of slavery.

In this online viewing room we have highlighted some works for you. You can watch video’s in which, Isaac Julien himself gives an insight in some of his works and the thought process behind them. 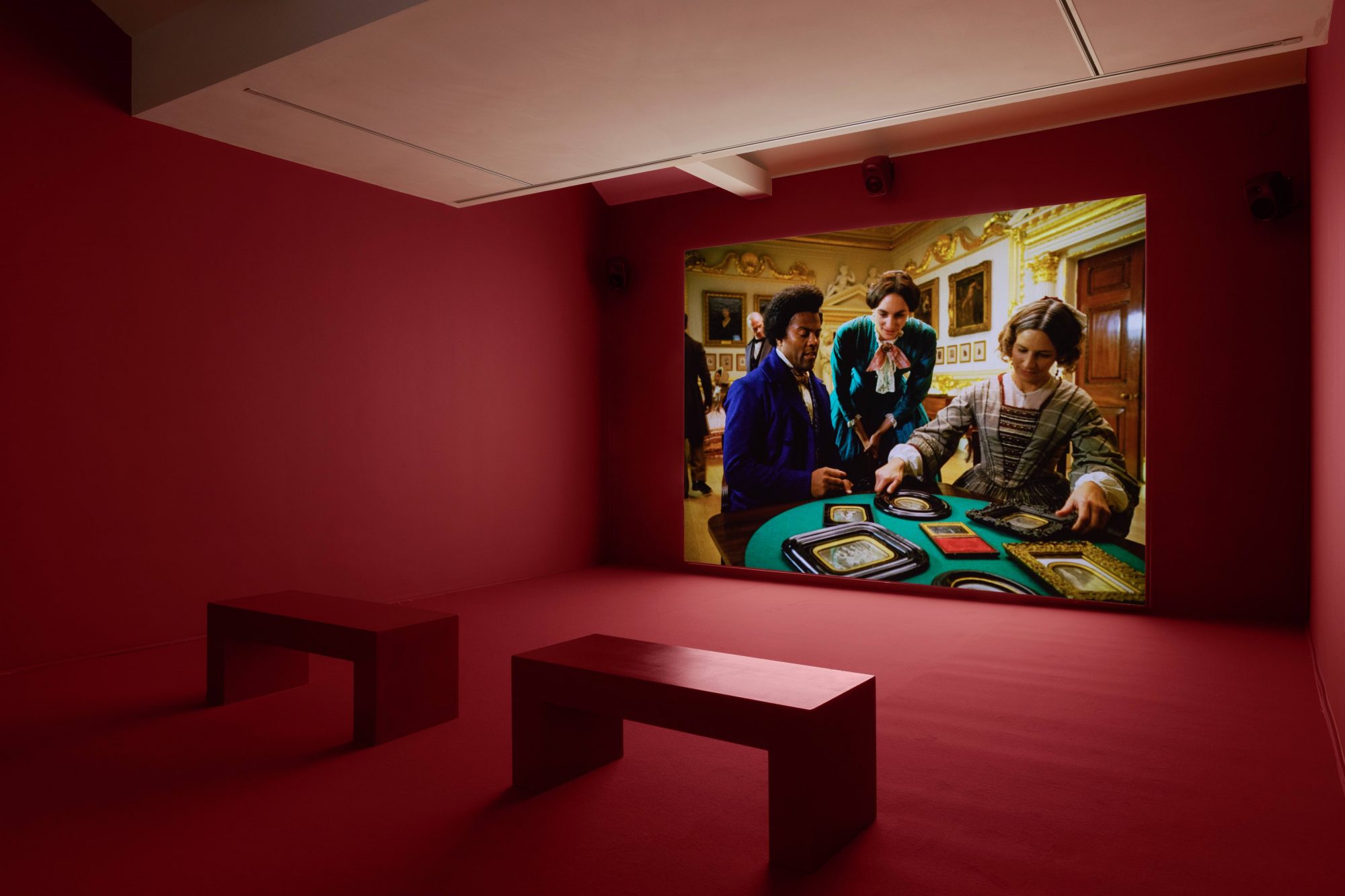 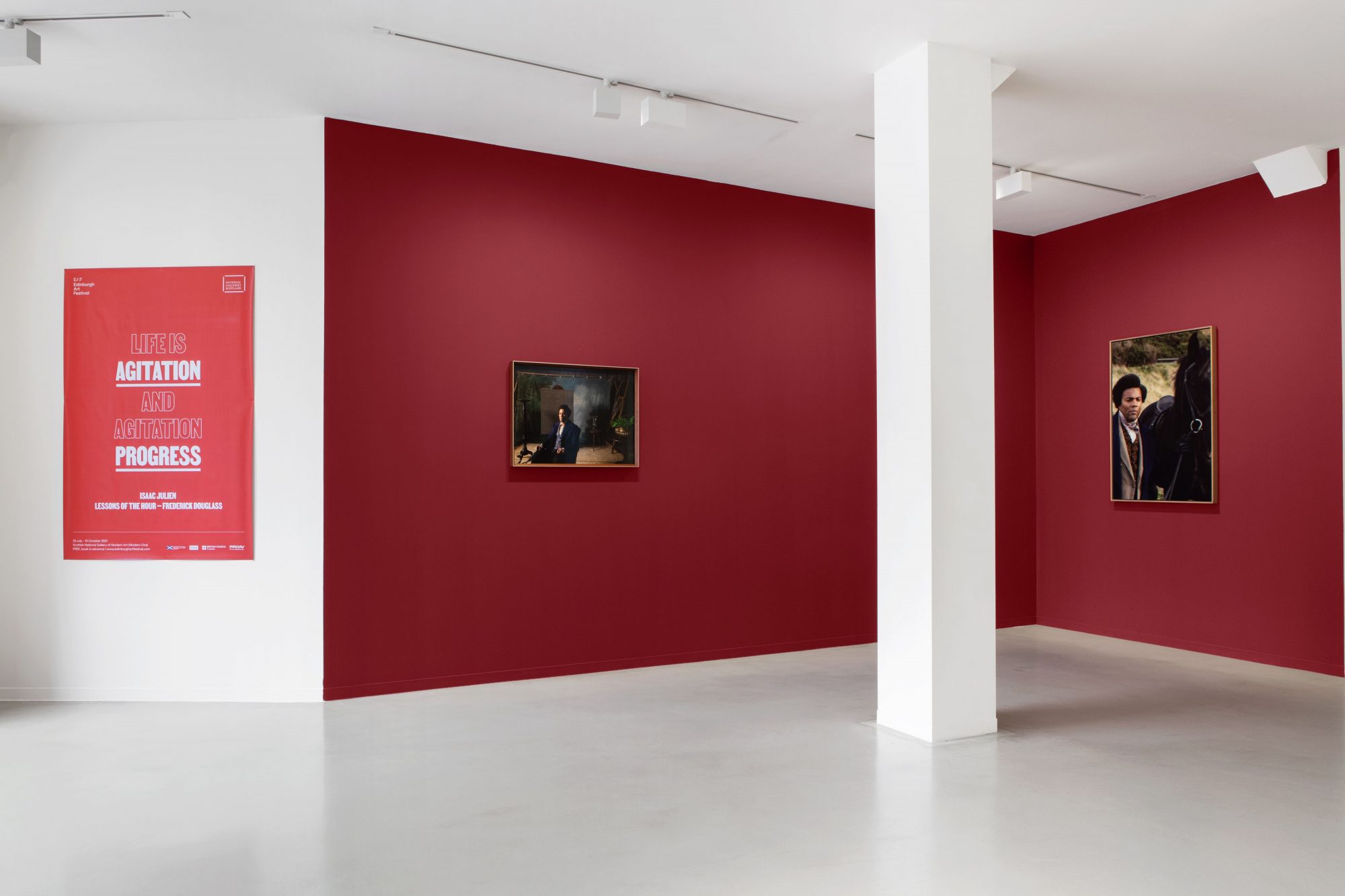 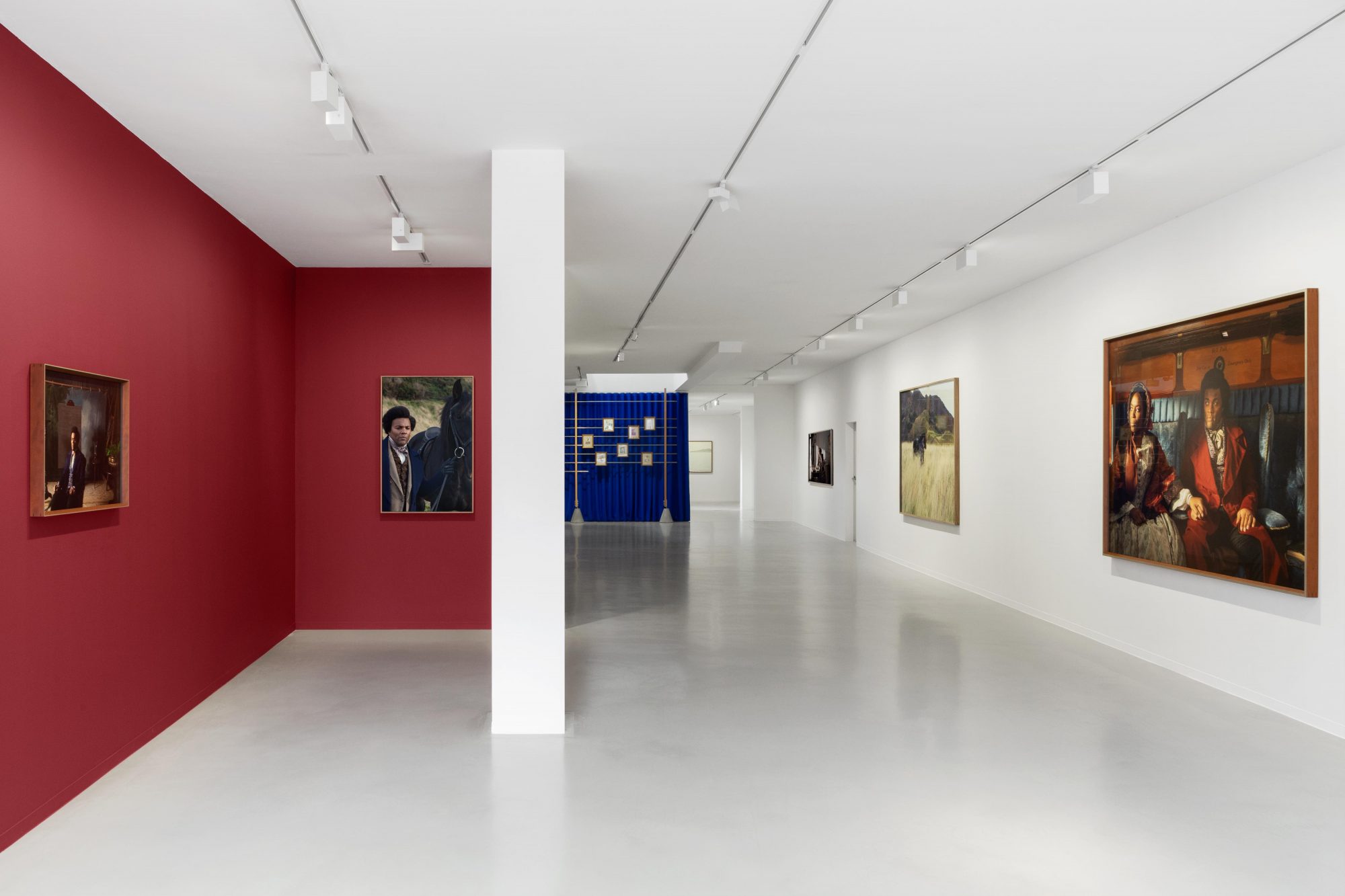 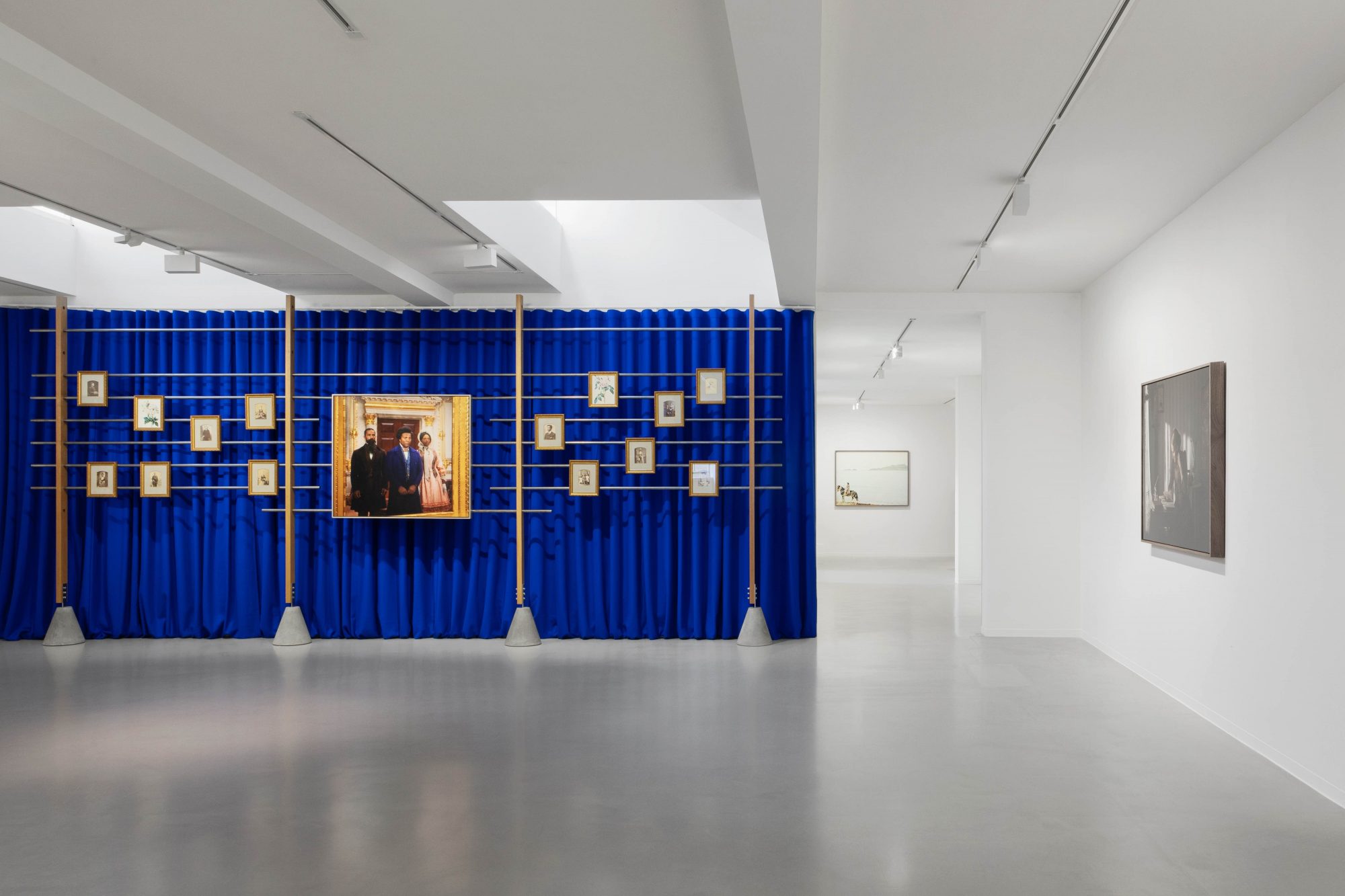 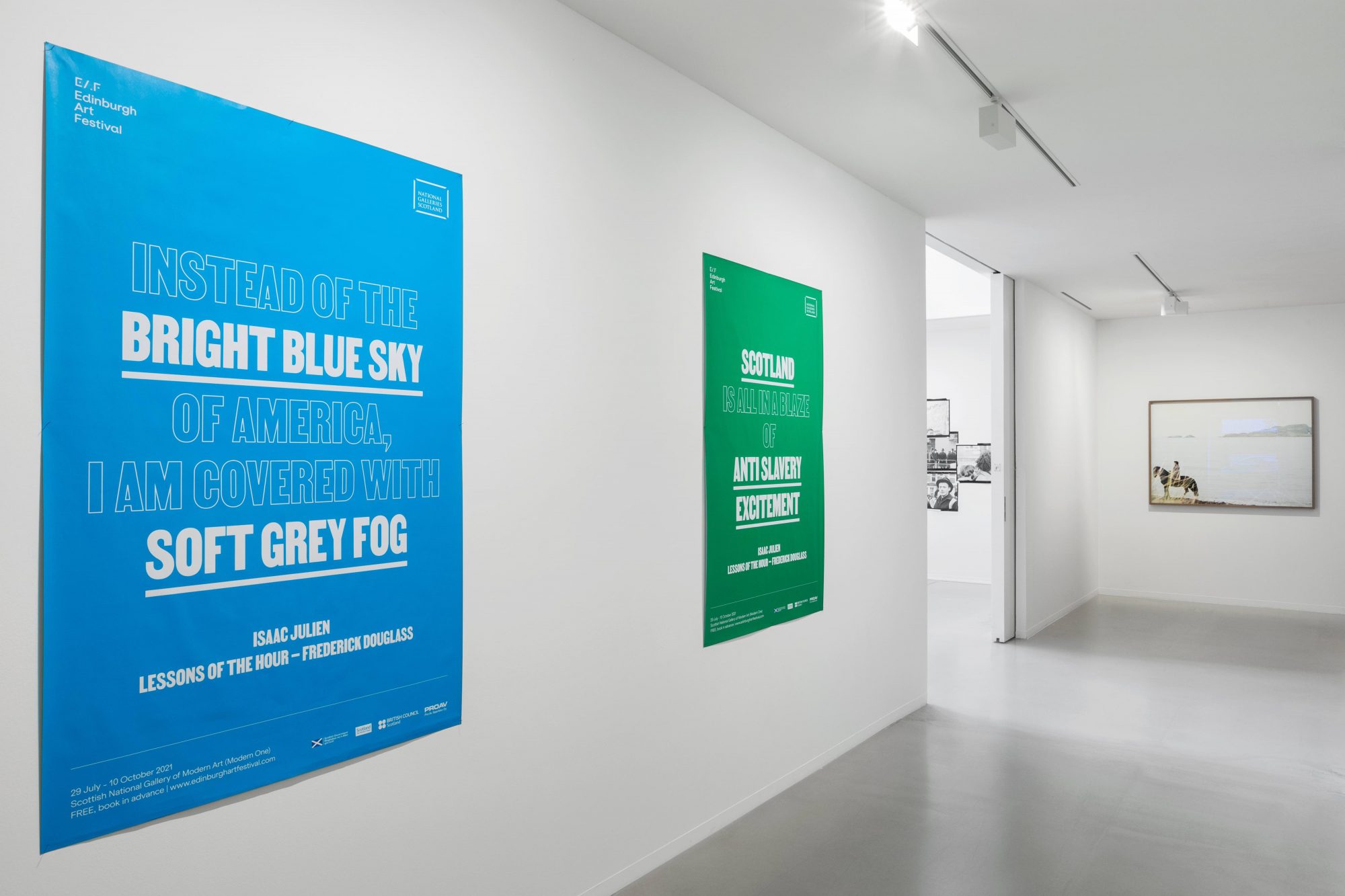 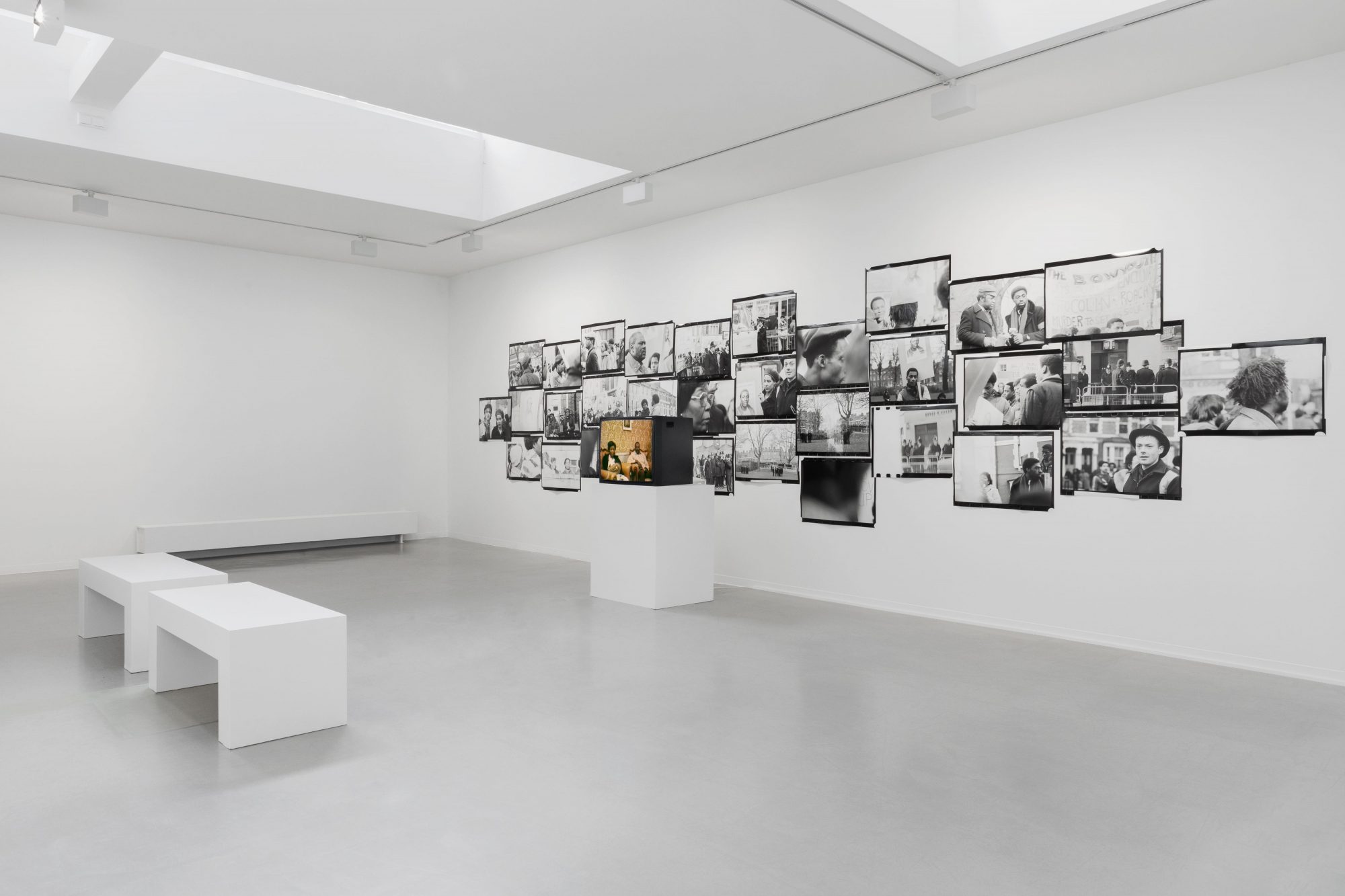 Swipe right to see some installation shots of the exhibition

Lessons of the Hour

Lessons of the Hour is a poetic portrait of the orator, philosopher, intellectual and self-liberated freedom fighter Frederick Douglass (1818-1895), who was born into slavery in Maryland, USA. He campaigned across Britain and Europe against slavery and for freedom and social justice. Filmed at sites in London, Edinburgh and at Douglass’ home in Washington D.C., Julien’s film combines tableaux vivants which imagine scenes from Douglass’s public and private life, with footage from the present day.

In the film, the character of Douglass interacts with other cultural icons of his time. Mostly women, these characters were chosen for being representatives of ideals of equality, which were as important then as they are today. The film features Anna Murray and Helen Pitts, who were respectively Douglass’ first and second wives. Anna Murray Douglass was responsible for helping Douglass achieve not only his freedom, but she also supported him throughout his life and managed their home during his long absences. Anna and Ellen Richardson were two English Quakeresses who enabled Douglass to return to America as a free man. Susan B. Anthony was one of the most important American suffragists as well as Douglass’ longtime friend. On the day he died, he had been on stage for the last time in the company of Susan B. Anthony. Ottilie Assing was a feminist friend, who translated Douglass’ autobiography into German and engaged with the abolitionist cause by writing numerous articles published in Germany for the first time. 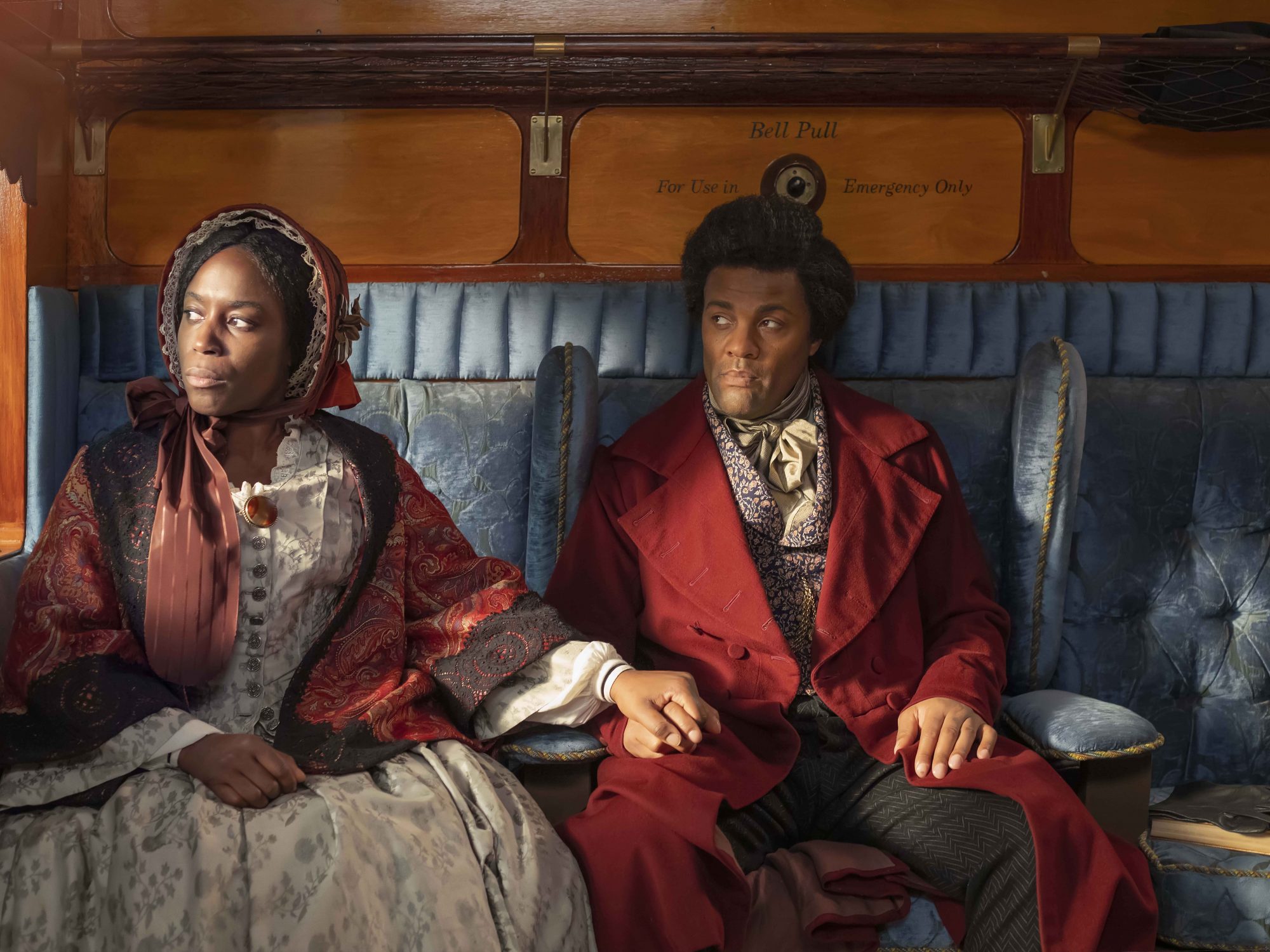 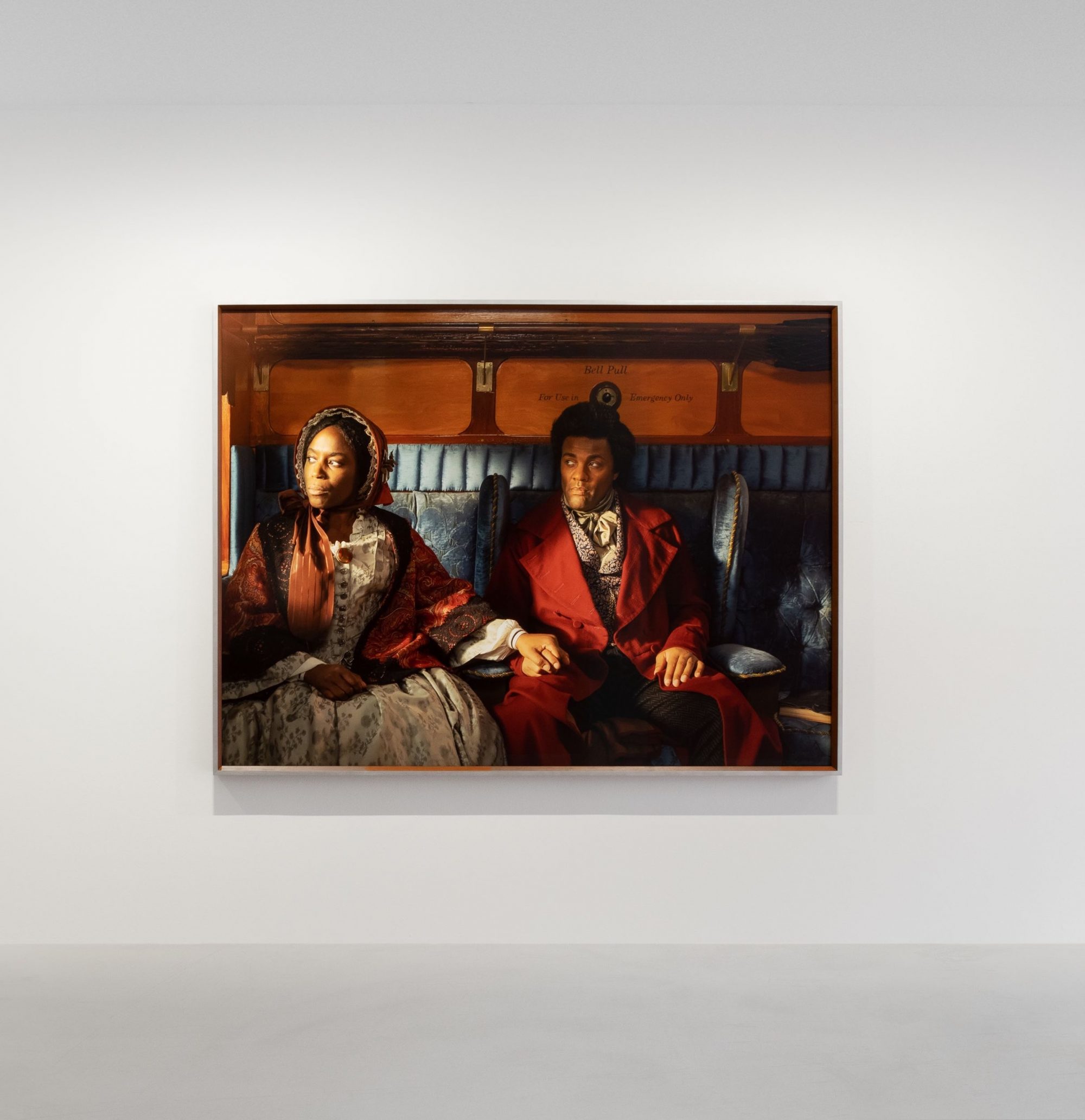 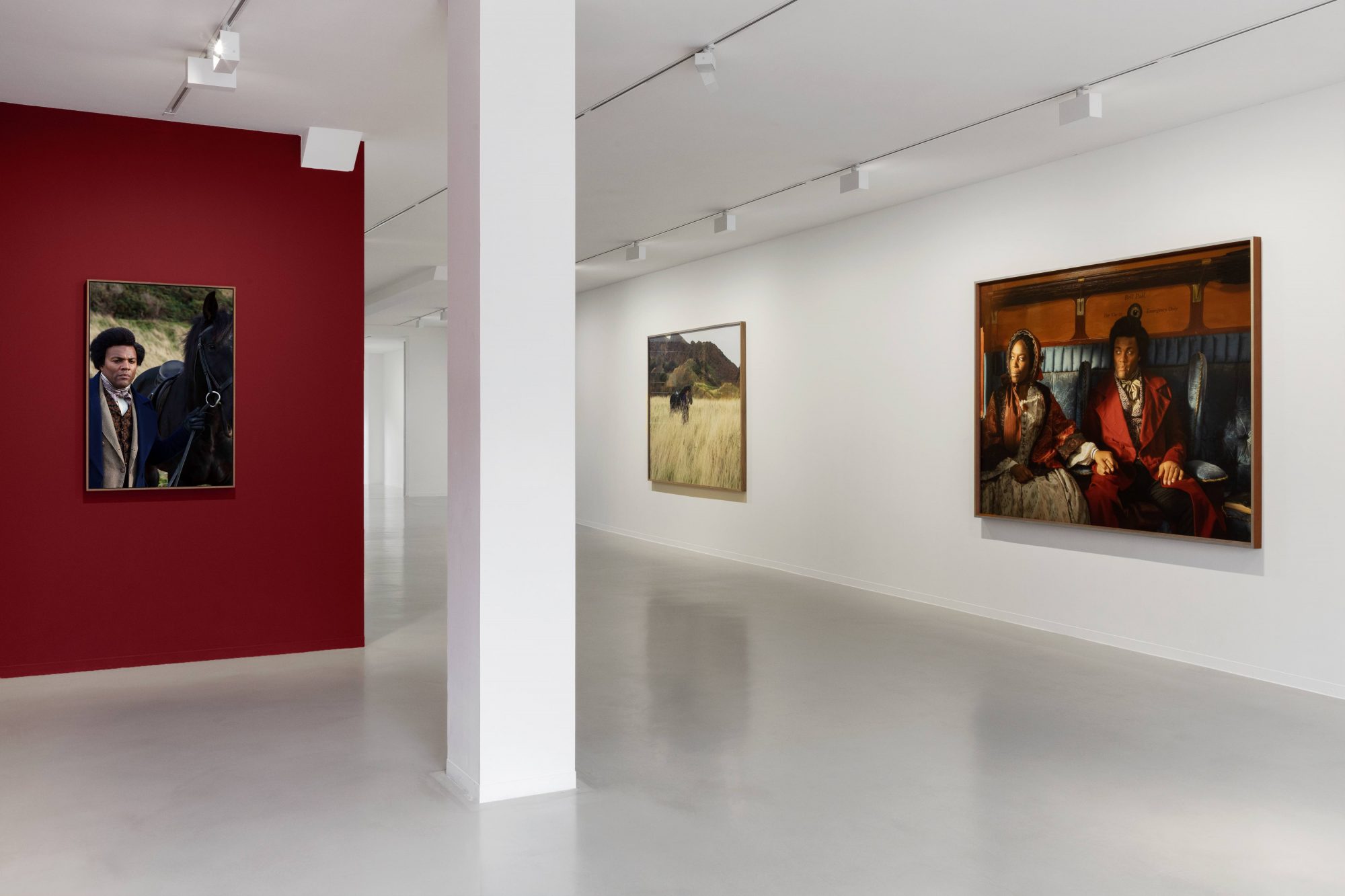 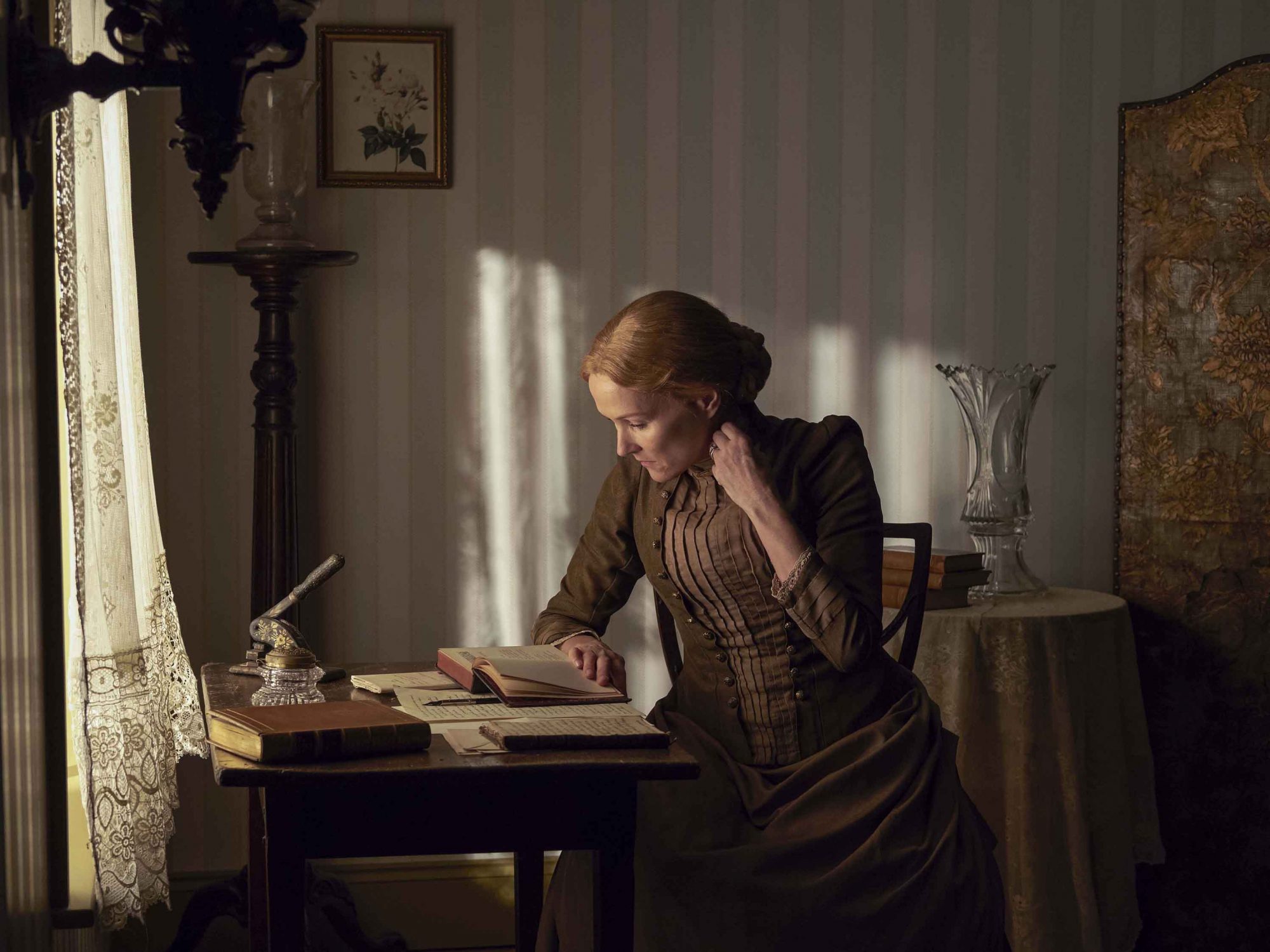 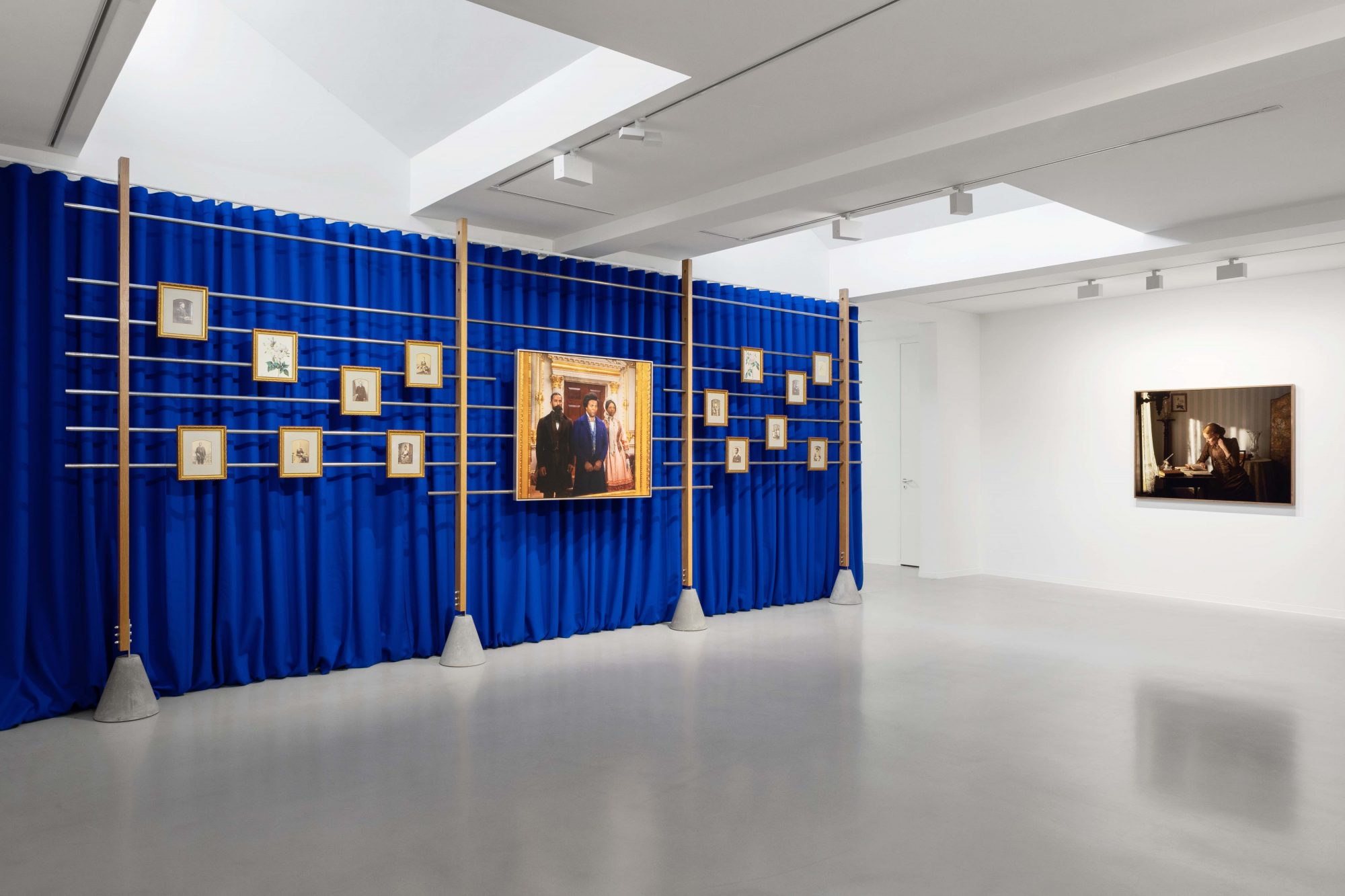 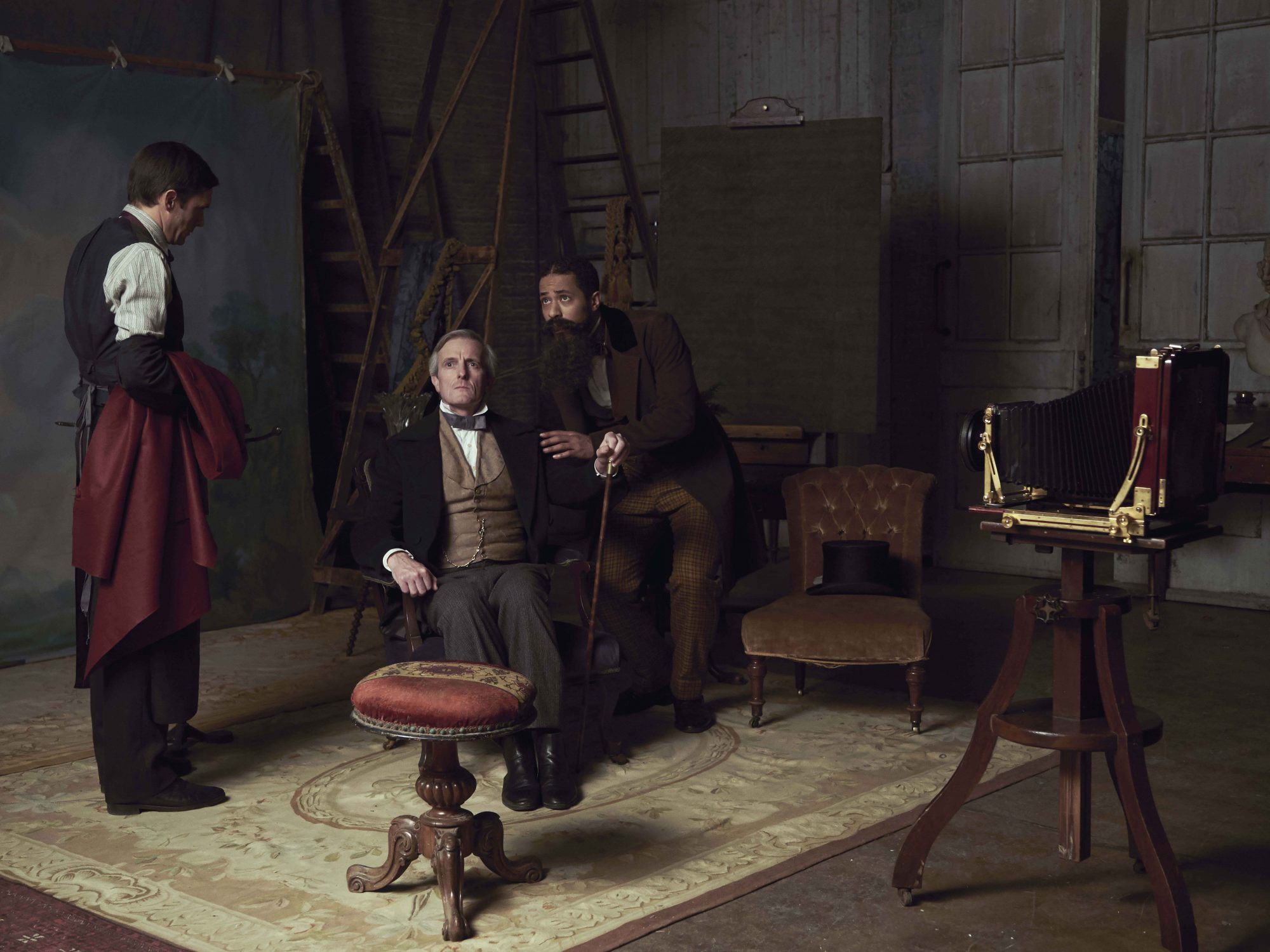 James Presley Ball was one of the first African American prominent photographers, a friend of Douglass, and a campaigner for anti-lynching. In the film, Ball’s photographic salon and studio are restaged while we hear parts of Douglass’ speech on photography, titled Lecture on Pictures. In this text, Douglass precedes Walter Benjamin’s idea of the reproductibility of images and the loss of their aura by almost forty years. 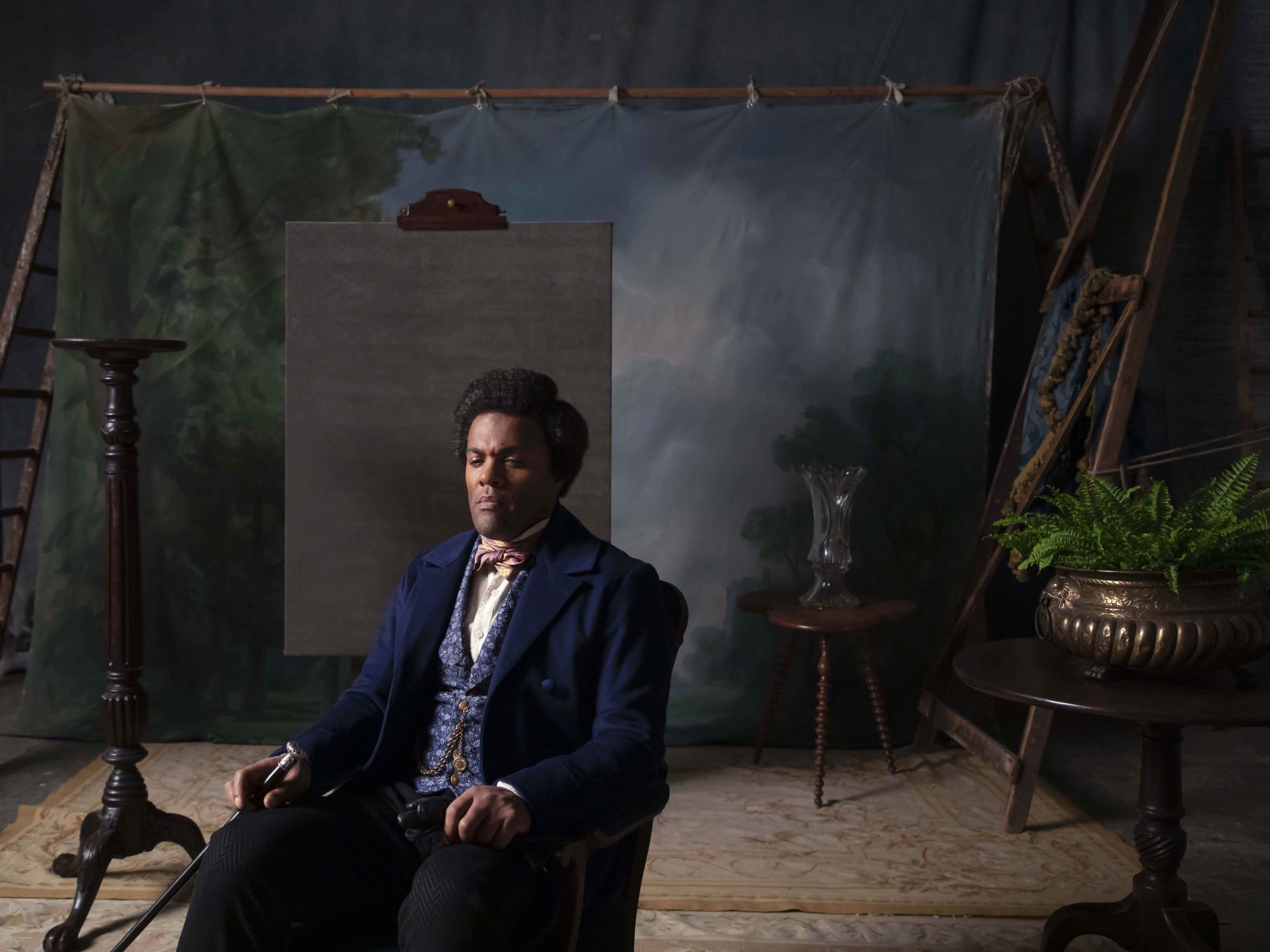 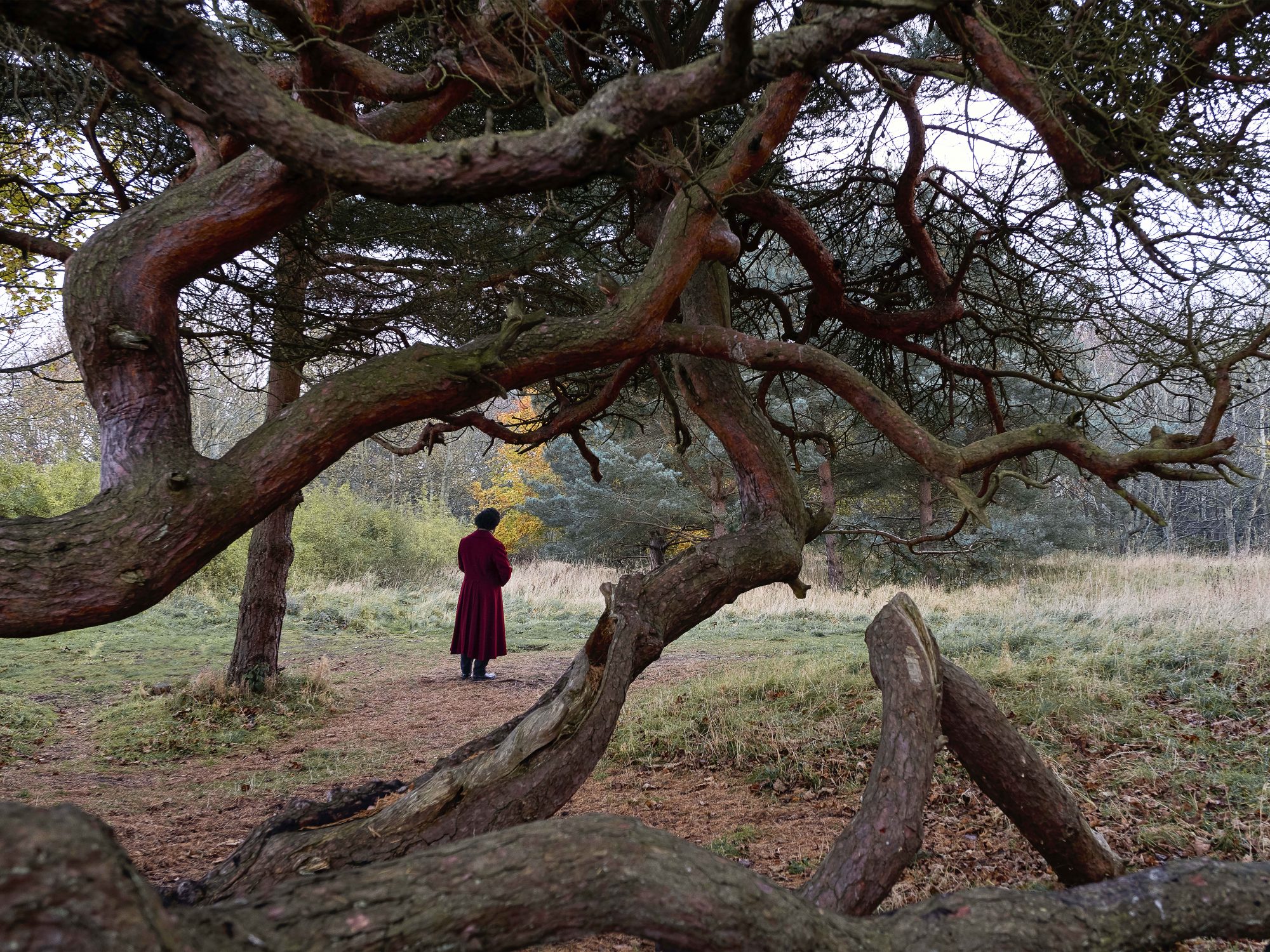 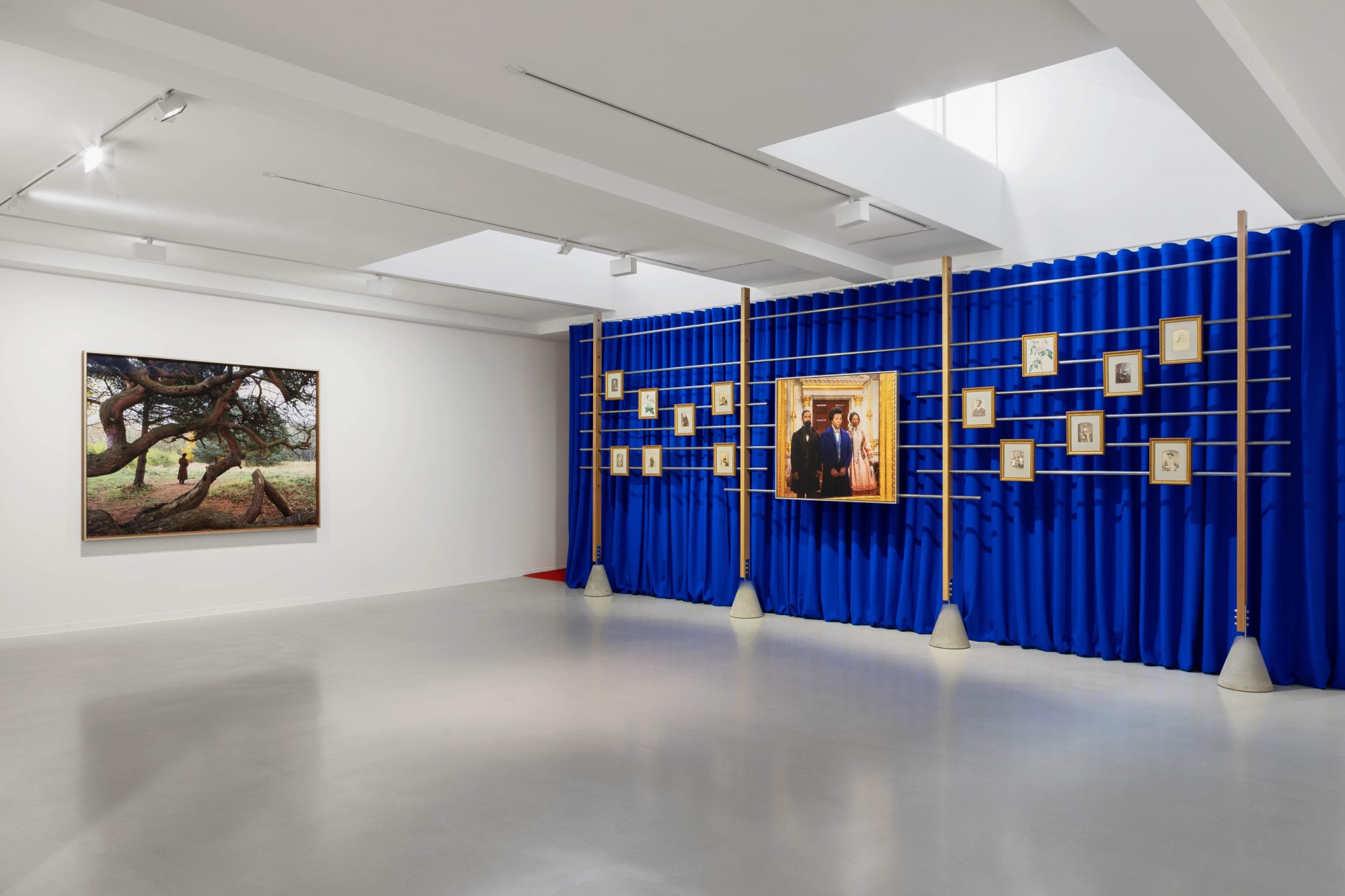 Rapture 1946
The photograph Rapture 1846 shows Douglass with his back to the audience with his body framed by the winding branches of a tree. The image itself looks very peaceful, but in the context of the film Lessons of the Hour this scene presents a very different emotion. In the opening of the film, a scene where Douglass looks sorrowfully up into the tree is disrupted with images of white hands on a rope and two black feet hanging in midair in the aftermath of a lynching. In this emotionally harrowing and psychologically traumatizing sequence, Julien is not only grappling with the atrocities of slavery but recalling the tragedies of a post emancipation era. Watch the artwork highlight by Isaac Julien below.

Serenade
Serenade shows, J P Ball, Frederick Douglass and Virginia L Burns Ball, Balls wife in J P Balls Salon.  Douglass never looked directly into the lens when he was photographed, this he did to have control of the way he was portrayed. Isaac Julien uses the same convention. In the photograph the three figures stare themselves in the eyes through the mirror instead of the camera. In this way Julien emphasizes the self-consciousness of the portrayed. Watch the artwork highlight by Isaac Julien below. 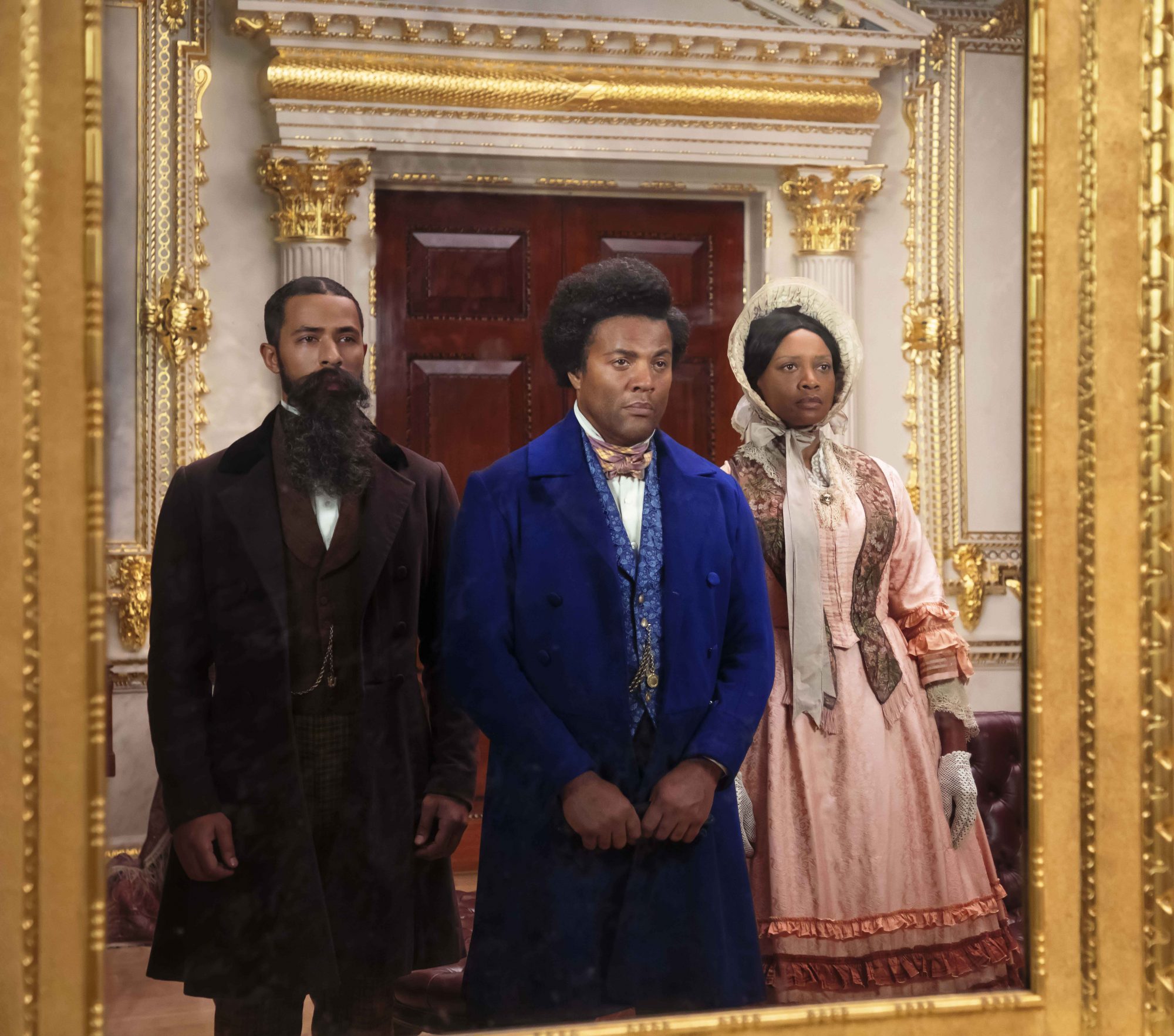 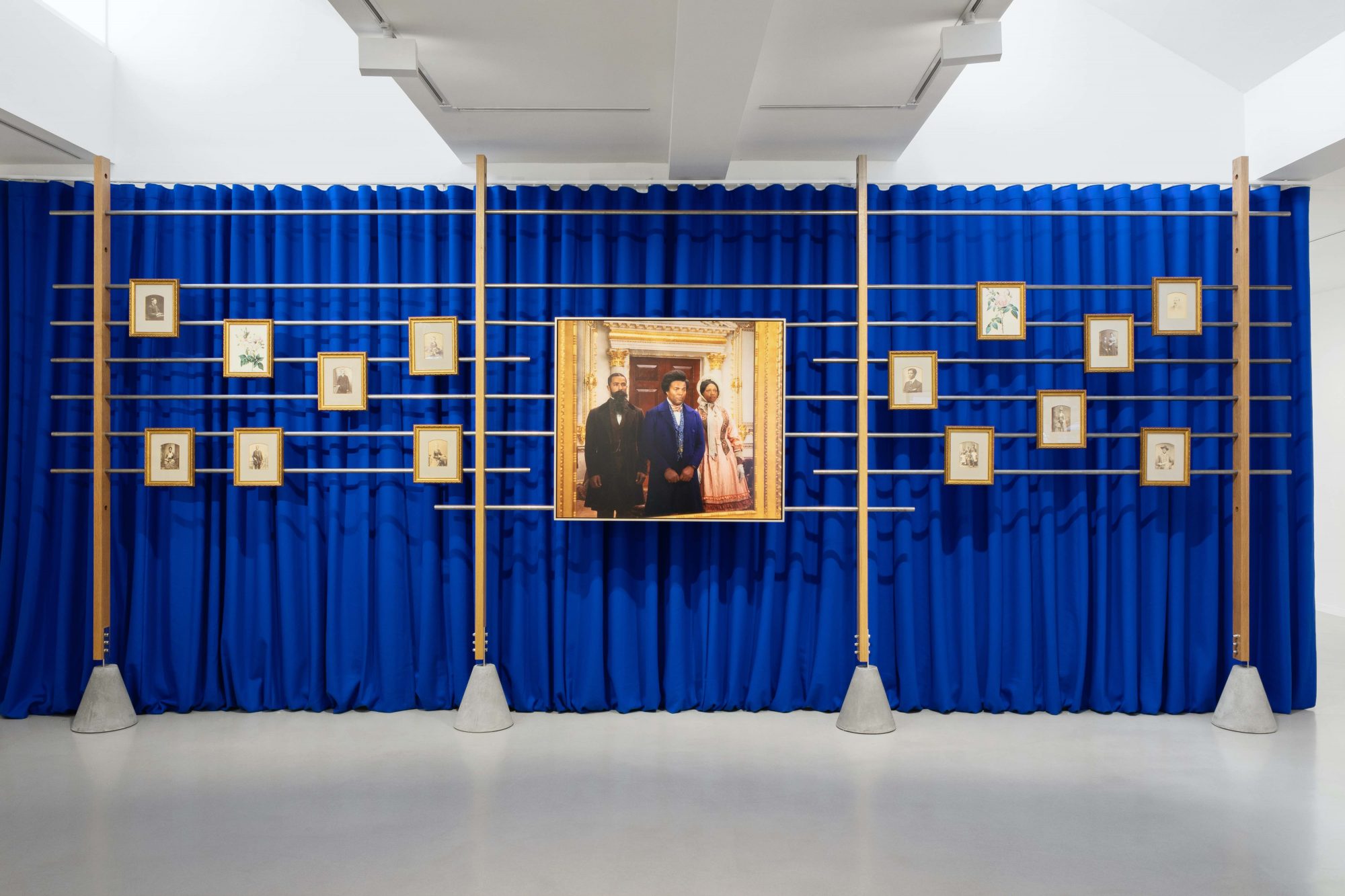 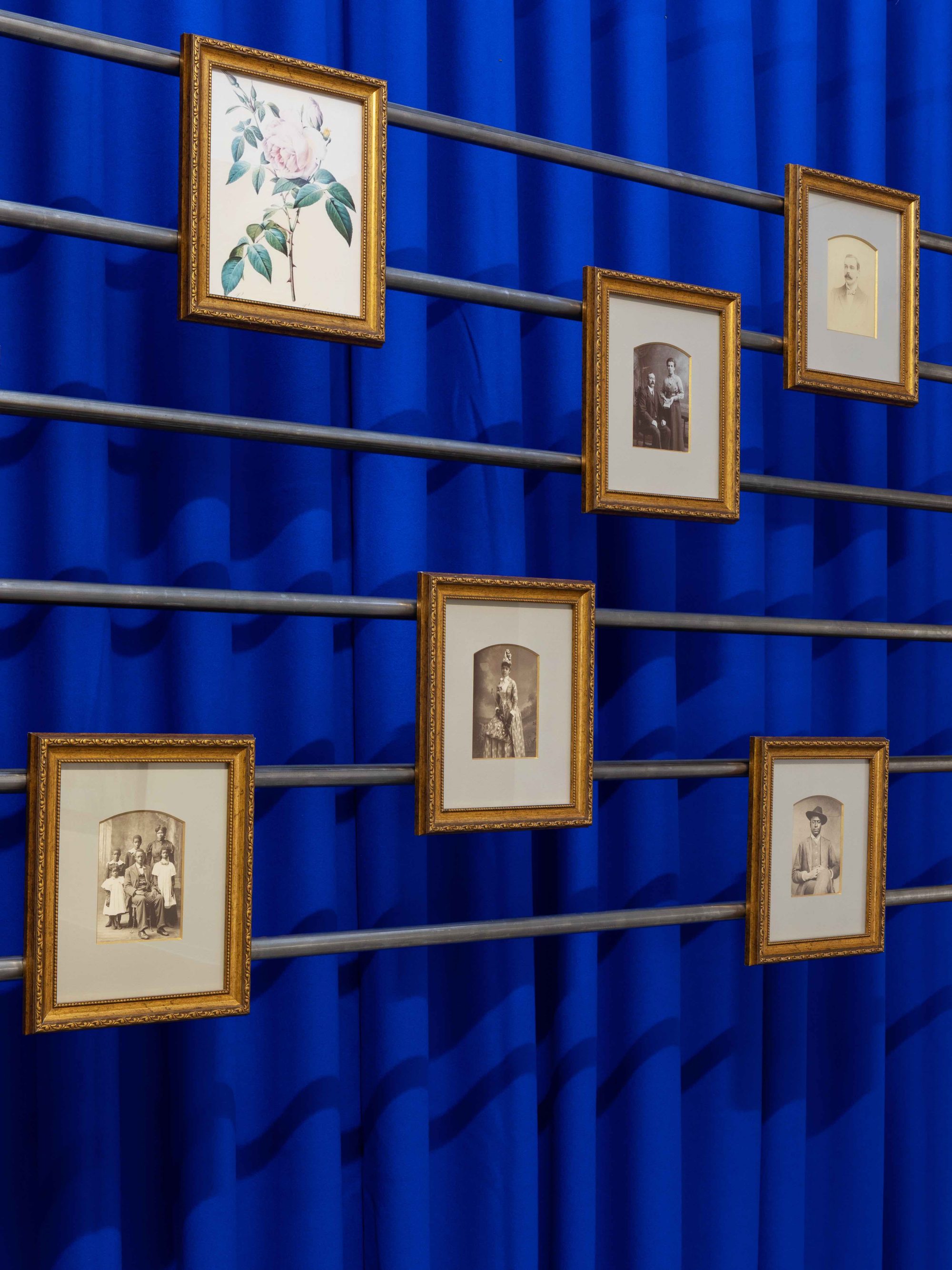 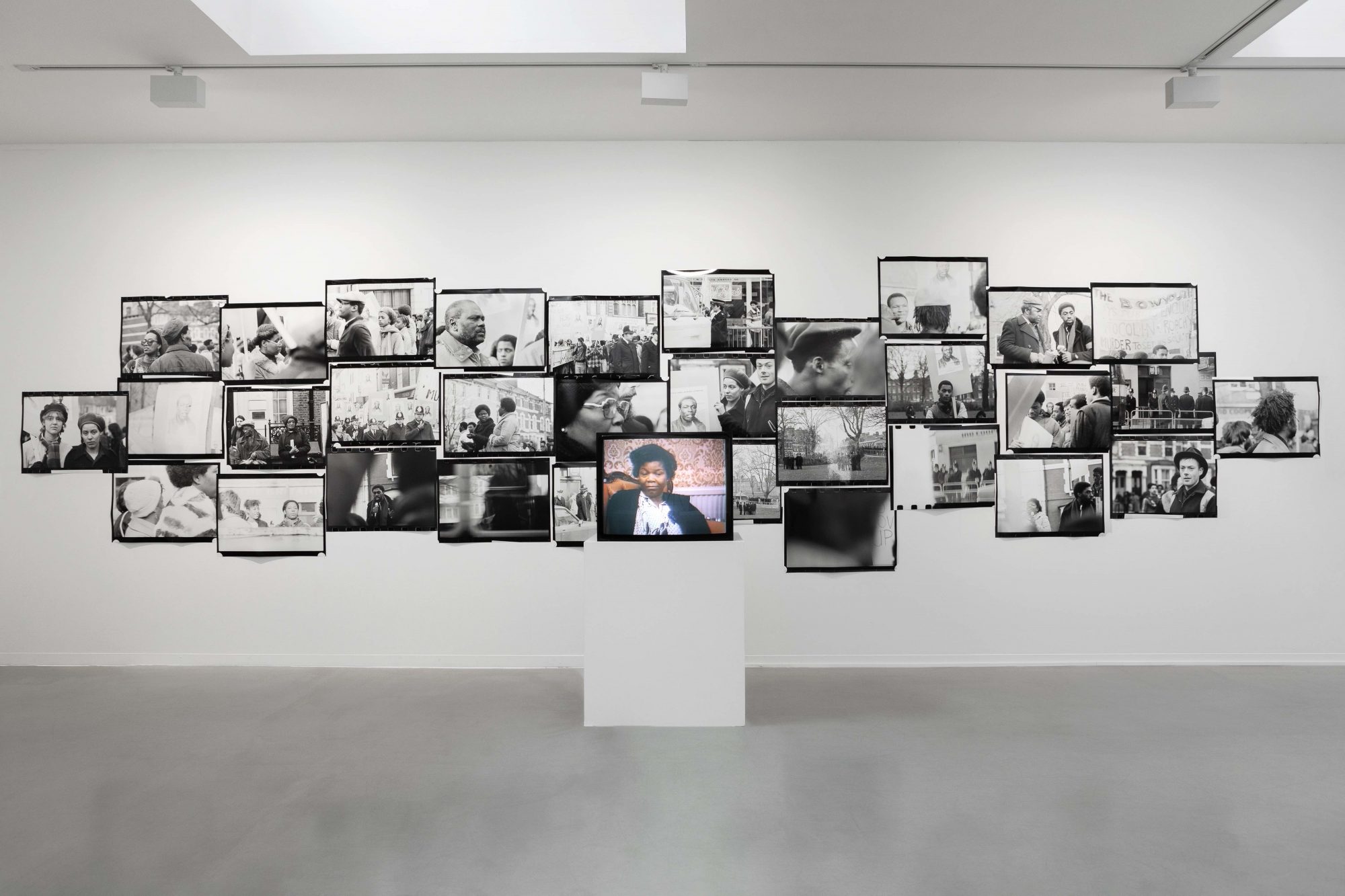 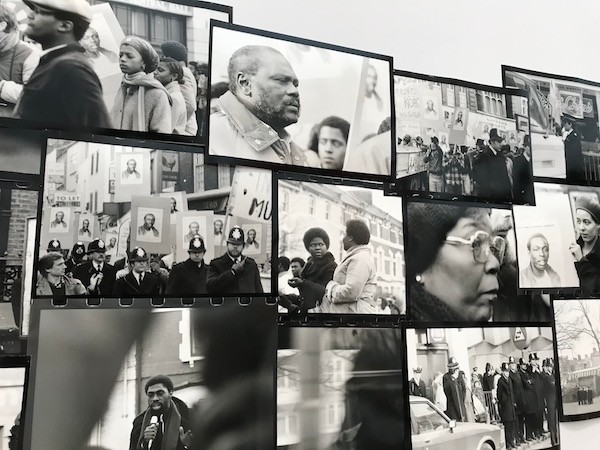 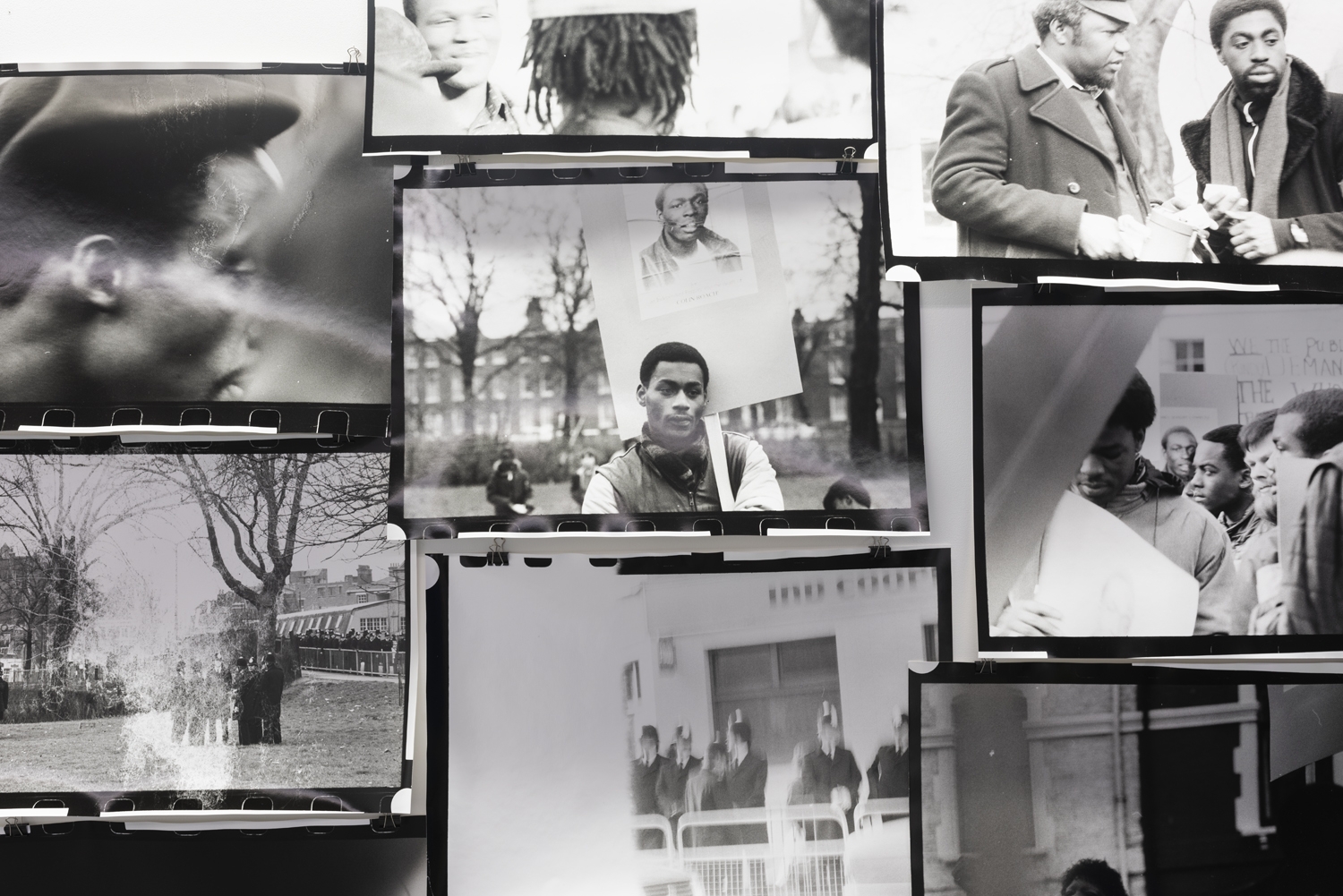 In 2018, while Julien was making Lessons of the Hour, he rediscovered photographs in his archive and reassembled the images so they dialogue with Lessons of the Hour. They show the people marching and demanding an independent enquiry into the circumstances of Colin Roach’s death. Intimidatory police tactics against the campaign demonstrations have been choreographed to the militant beat of the Mad Professor’s dub score, and the unity of black politics and culture is vividly conveyed by the poets and musicians who perform at a benefit for the campaign.

Watch the artwork highlight by Isaac Julien below.

For inquiries, please send an email to Nick Majoor at nick@ronmandos.nl, or click on the button: