With ‘The Factory Set’, the Kunsthal Rotterdam has a scoop: almost forty works by the Rotterdam-based artist Ron van der Ende have been brought together for the first time for an impressive retrospective in honour of his one hundredth bas-relief. Van der Ende is well-known for his monumental reliefs; almost flat sculptures of objects such as cars, buildings and space capsules. The sculptures he creates are archetypes of history that are familiar to everyone. His work includes symbols of progress, but also natural formations such as Crystals and more recent, transient objects such as a glowing ember of wood and a cut of meat. The exhibition offers for the first time a fascinating cross-section of Van der Ende’s oeuvre (he began making his bas-reliëfs fourteen years ago), focussing on the consistency and beauty of his work, and the traditional creative process he uses.

Hand-crafted
Ron van der Ende’s approach is both meticulous and time consuming. Eachof his works consist of a mosaic of countless pieces of thinly-sawn old wood that still bear their original layers of paint. He selects these veneers according to colour and shapes them by hand until they fit perfectly. The reliefs are robust in their design and from a distance appear true to life. A closer look at the veneer, however, reveals amyriad palette of tints and hues, and the rough surface of the used wood, which is fixed with hundreds of nails. The meticulously constructed perspective creates a fascinating trompe l’oeil effect, an optical illusion whereby the works appear to extend forwards into space, while their depth in reality is only about twelve centimetres. Most of the works on display are not usually exhibited to the public. 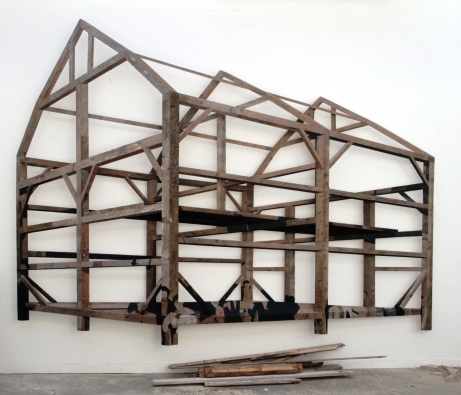