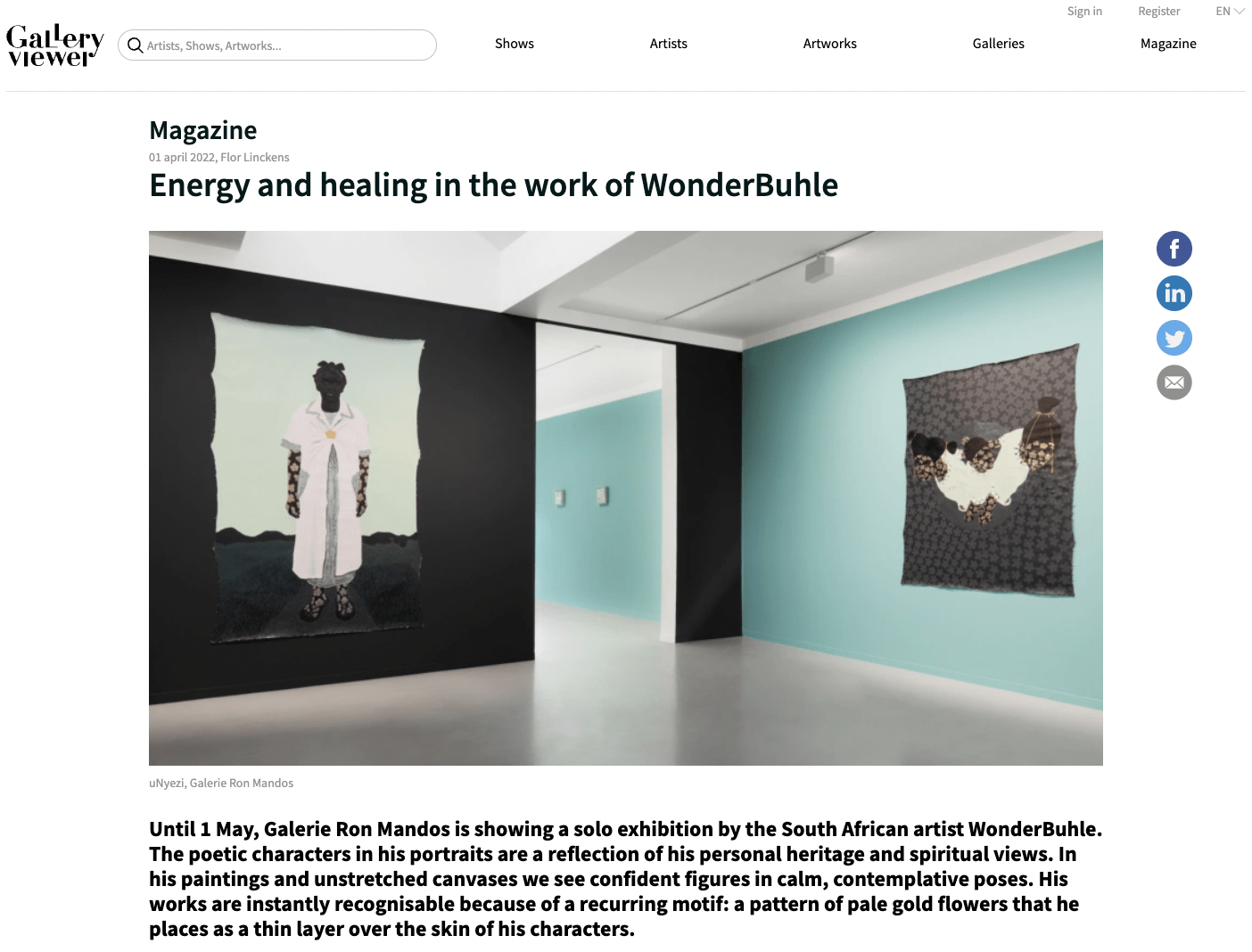 GalleryViewer published a new article about WonderBuhle ‘s exhibition uNyezi at Galerie Ron Mandos. Read it here.
The article was published on April 1, 2022 and written by Flor Linckens.

“Until 1 May, Galerie Ron Mandos is showing a solo exhibition by the South African artist WonderBuhle. The poetic characters in his portraits are a reflection of his personal heritage and spiritual views. In his paintings and unstretched canvases we see confident figures in calm, contemplative poses. His works are instantly recognisable because of a recurring motif: a pattern of pale gold flowers that he places as a thin layer over the skin of his characters.” – Flor Linckens

The symbol of the flower carries a threefold meaning. When he was playing in the flower fields as a child, his grandmother would always caution him to be careful with a specific type of white flower, which she described as magical, lucky flowers that hold our fortunes. In addition, WonderBuhle’s pale gold flowers also refer to Impepho, a local plant that is dried and roasted and is subsequently used in a ritual that involves communication with ancestors. The plant also happens to contain a bright yellow flower. By using metallic paint and a star-like flower, the artist also refers to the moon and stars (or star dust), another recurring motif in his work. Combined, they represent a certain energy, which is used to charge his characters, to purify and protect them. At the same time, the flowers obscure their identity.

WonderBuhle grew up in a small village in Kwa-Ngcolosi, in the south-east of South Africa, where life unfolds much more slowly compared to the busy city of Durban, where he currently works. It almost seems like the artist is doing everything in his power to regain a level of peace that he experienced in his youth. The intensely dark nights that were lit only by the moon, a darkness that was heightened because his spiritual grandmother was the only one in the village who didn’t want to use electricity. Nights where everything is identified through silhouettes. The artist still prefers to work in the evenings and at night, because he feels that he can think more freely then.

His grandmother was a defining factor in his childhood because she instilled a deeply felt importance of spirituality, tradition and community in him. When the artist speaks about his work, he regularly talks about the importance of passed down knowledge and traditions in his family, which he passes on to the world in his own way. He particularly remembers the stories his grandmother told him. WonderBuhle: “I was brought up by my grandmother, who taught me almost everything about becoming the man, the person I am today.” His mother worked as a sangoma, a spiritual healer in the community, and was therefore often away from home. Yet she was the one who encouraged WonderBuhle to translate his love of art into a career, because he would always draw on their cylindrical Rondavel house as a child.

WonderBuhle’s work is closely linked to a specific time and place; the white flowers refer to his late grandmother, the imphepho flowers to his sangoma mother, and the stars and moon to the vast starry skies of Kwa-Ngcolosi, where he grew up. The artist’s signature greens also refer to his home, as these turquoise and mint greens were used on the traditional Rondavel homes in his community. At the same time, the colour green refers to spirituality, an important element in his paintings. Healing is central to WonderBuhle’s work, so it’s no surprise that the artist originally wanted to become a psychologist.

WonderBuhle’s paintings reflect the artist’s strong ties to his community and they express the energy passed down to him through his grandmother’s bloodline. As a buyer of one of his works you receive a kind of blessing. In addition, the artist consistently hosts an open studio event before showing his works abroad, infusing the paintings with the positive energy of the people in the space.

His tranquil muses often radiate something divine and their black skin contrasts beautifully with the deep blue and green tones. The works also have a certain depth and texture in a literal sense. The artist adds coarser, thicker dollops of colour to his canvas, which contrasts with the mysterious matte figures that have been executed with great precision. In some cases, the green enlivens the background, while the characters in other works seem to be completely absorbed in a sea of ​​light green. In other paintings, the greenery forms a veil covering their eyes. In the work “Emasisweni”, the entire top half of the face disappears abruptly into the background of the canvas. The character thus becomes both foreground and background, almost like a symbol of infinity. Another recurring symbolic element is the snake, which does not symbolise danger in South Africa, in contrast with the European art tradition. Rather, they symbolise protection and information. And according to a local wisdom, if you see a snake and don’t tell anyone, it’s a signifier of good luck.

In the work “Umoyamunye” (“The mind as one”) we see about fifteen characters, fourteen of which seem to dissolve into the night, almost like silhouettes. One of the central figures, a young woman, is the only one who has opened her eyes. She is also the only one whose skin is covered with pale gold flowers and she is the only character with bright pink hands. In this work, she functions as a conduit or a vessel that is in contact with the divine, and she is the only one who is able to really see. She transfers this knowledge to the other characters through their hair, through which they are connected. Proud African hairstyles play a prominent role in almost all of the paintings on display. Women are celebrated and empowered in WonderBuhle’s works, as a tribute to the important women in his life. This includes his daughter uNyezi, whose name means “the moon” or “the one who sits among the stars.”

It’s important to note that WonderBuhle’s work is not focused on Black identity in a larger sense. European interpreters tend to want to fit his work into existing boxes and the current discourse, but the artist does not attune his work to current political or social topics.

WonderBuhle completed his training at the BAT Center in Durban, the Velobola Apprenticeship program at Durban University of Technology and a series of residency programs — at The Art House in Wakefield, UK, The La Brea Studio Artists Residency in Los Angeles and a residency that was part of the Bremen Kunststipendium.

WonderBuhle, born 1989 in South Africa, is a Durban-based visual artist from Kwa-Ngcolosi, a village that is still ruled by a chief. He started making art as a hobby at the age of nine. He says that his mother encouraged him to explore art as a career as he used to play with charcoal from the fire and draw stick figures on the walls of the house as a child.

WonderBuhle received his first formal training through the BAT Centre Artists in Residency (AIR) Program and went on to study fine art through the Velobala apprenticeship program at Durban University of Technology, under the mentorship of Themba Shibase.

The artist states: “I understand my artistic practice as a space between my inner soul, my dreams and my identity. I communicate my views from where I am standing as a black youth in South African society and the world at large. South Africa is in a moment of self-realization; reflecting and embracing its cultural diversities, whilst rewriting its stories through the lenses of young people who are curious, like myself.”

WonderBuhle had his first solo exhibition at the Durban Art Gallery in 2018 and has been included in numerous group shows at Unit, (London, 2020); The Art House (Wakefield, 2018); Michaelis Gallery (Cape Town, 2017); KZNSA (Durban, 2015) and the African Art Centre (Durban, 2014). In 2016, he was the recipient of Bremer Kunststipendium Art Grant (three-month residency) and in 2020; he took part in the La Brea Studio Artists Residency in L.A. 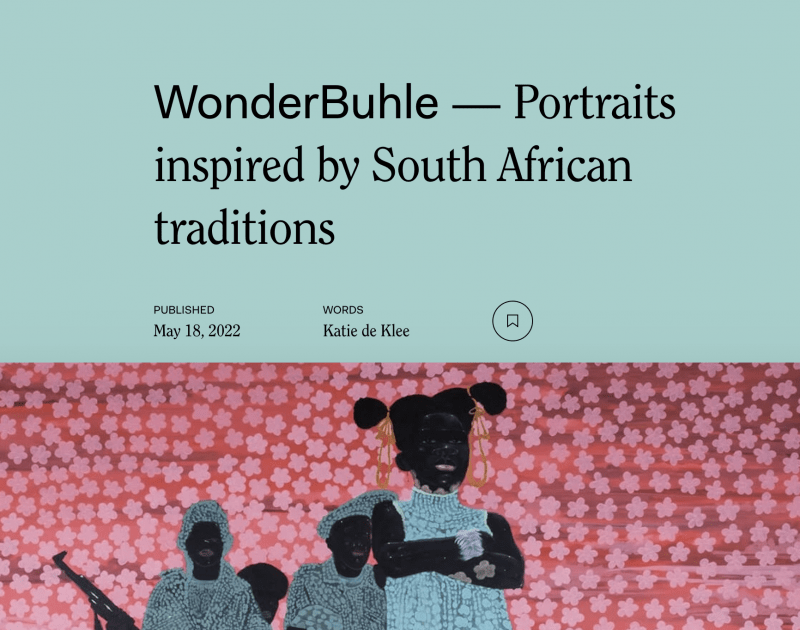 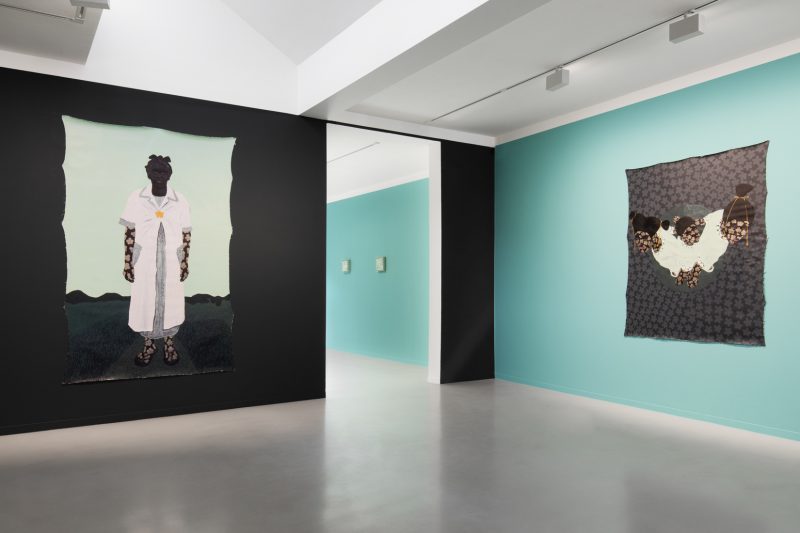 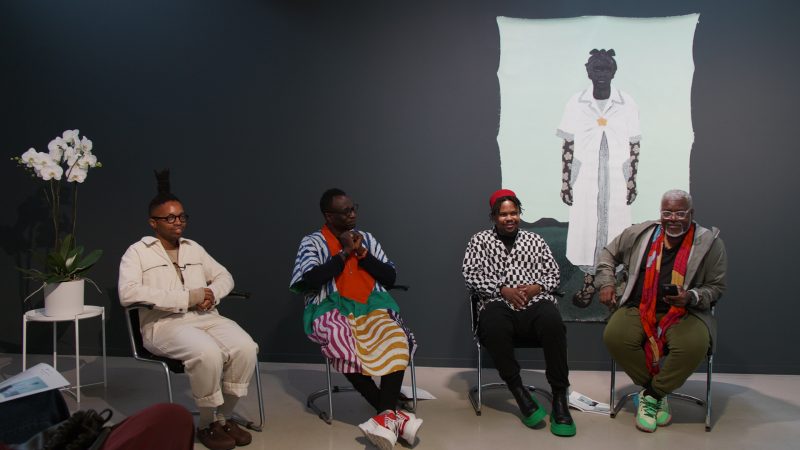 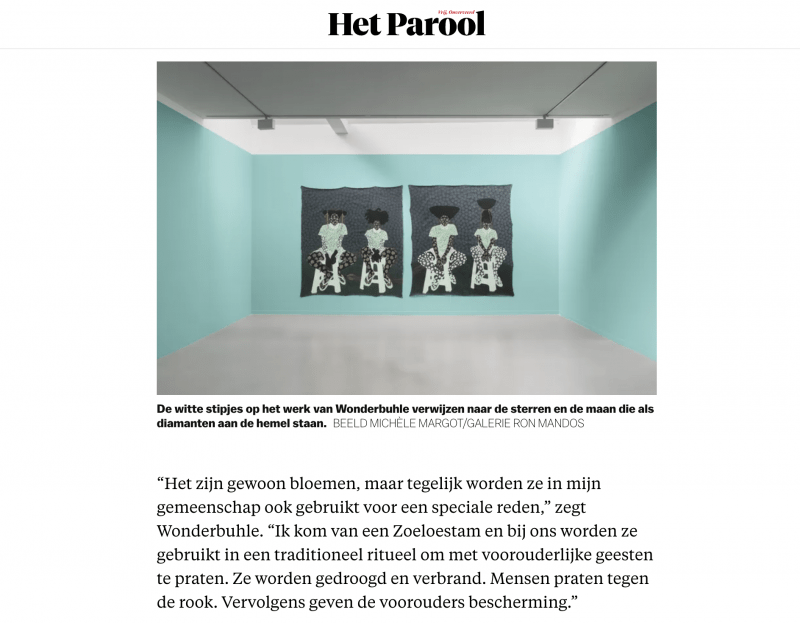 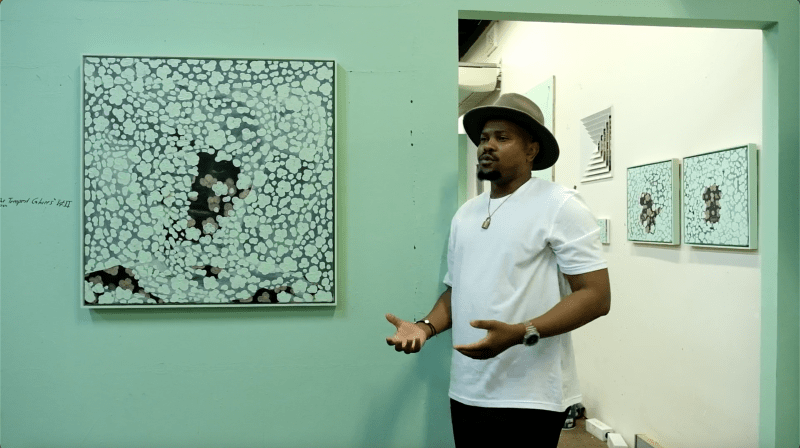 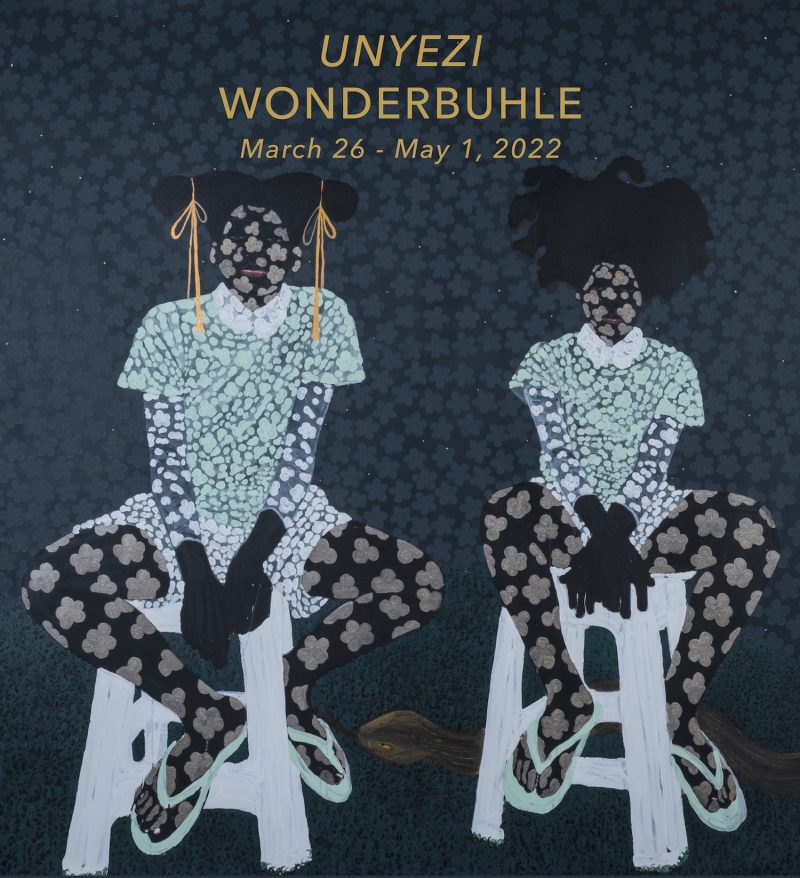 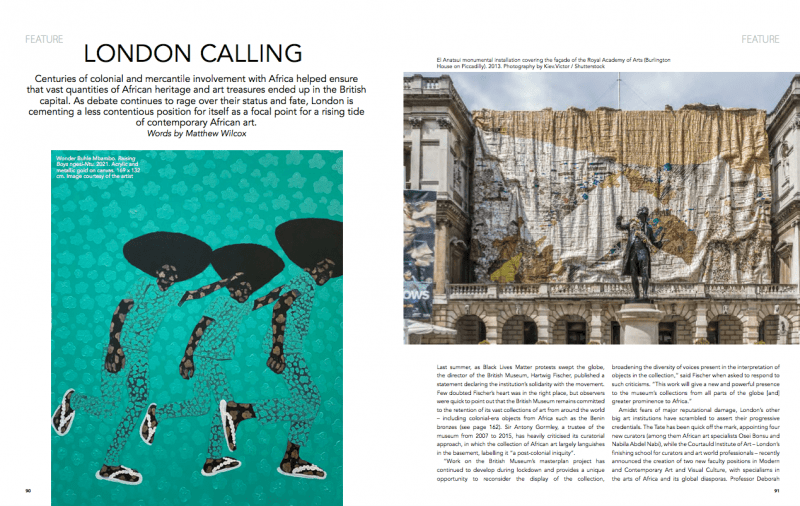 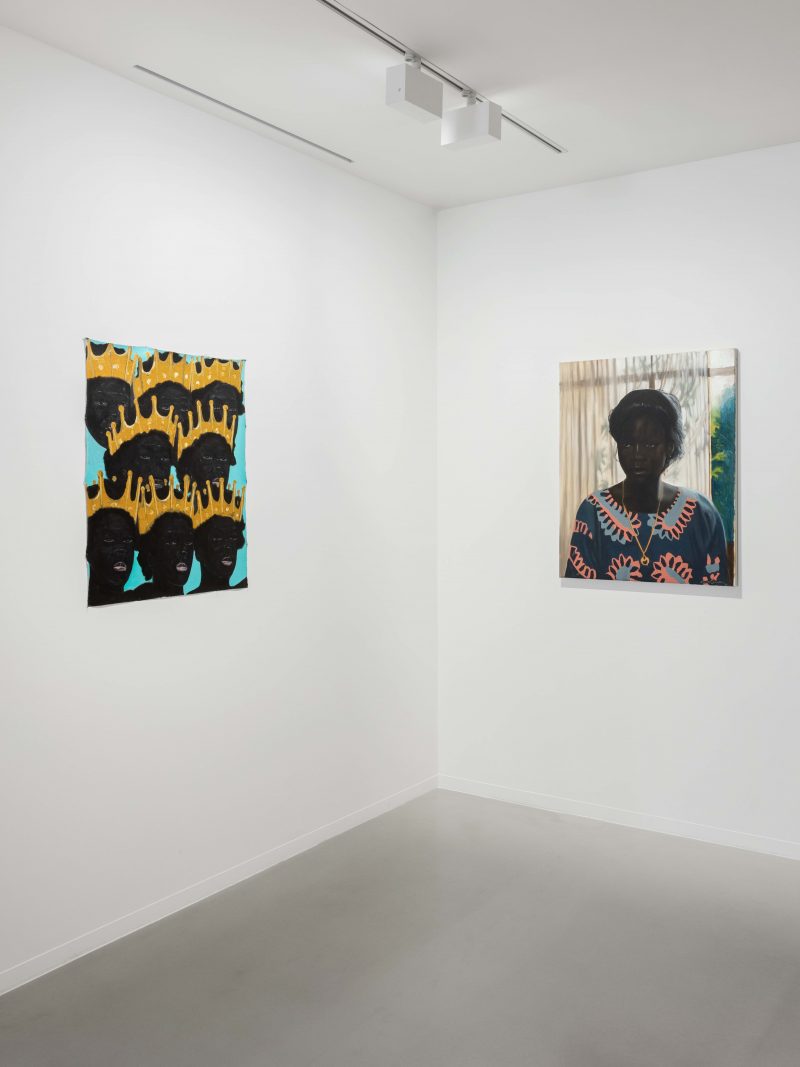 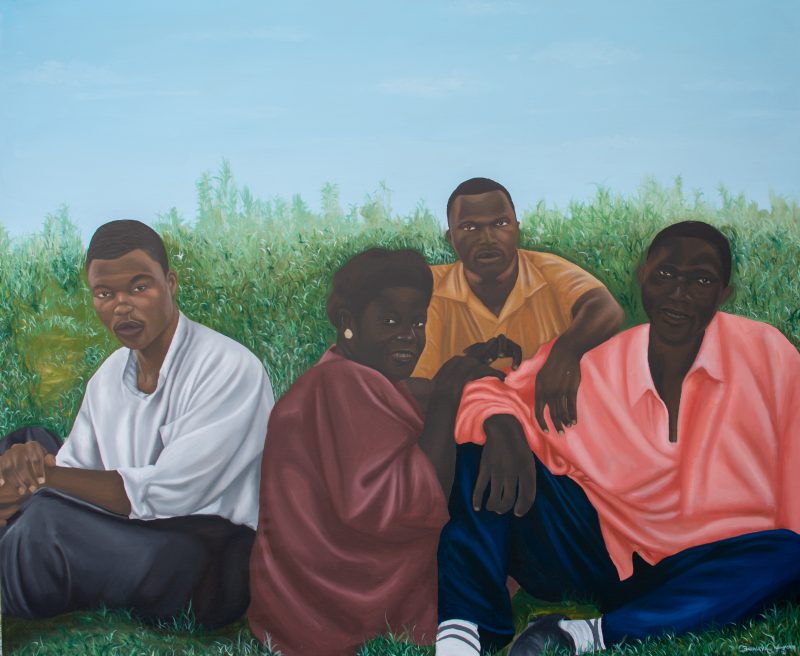