Galerie Ron Mandos proudly presents Lost in Time, the first solo exhibition by Moldovan artist Pavel Grosu (1991). Since his graduation at the Art University in Cluj-Napoca (Romania), Grosu has created a mature body of work which has amassed critical international attention. Masterly trained in figurative painting, Pavel Grosu embraces the rich legacy of the old masters, whilst creating unsettling painterly collages and compositions that are anchored firmly in the present. Grosu’s work asks us to contemplate what, and where, is time, and how do we exist within it.

Curated by the Amsterdam based Romanian art critic and curator Maria Rus Bojan, the exhibition Lost in Time presents a selection of new works that explore the world of dreams, illusions and memories. His compositions propose ambiguous scenarios and sometimes absurd situations which evoke a reality that is uncanny, sometimes hermetic and compressed in a silent time-space. Pavel Grosu’s works depict various scenes and portraits in which the subjects appear to be frozen in time and trapped in an illusory world, evoking an uncertainty about the future.

Suspended in an undefined place, the resulting effect of ambiguity allows these works to look like juxtapositions of different fragmented realities. The artist deploys digital collage as a tool for building complex, carefully thought out compositional structures which are later translated into paintings. Challenging the many facets of representation through his surreal association of elements, Grosu engages with the topic of the multiple realities we are living in and proposes a possible escape. These works confront the viewer with a rather confusing blend of visual stimuli – a disconcerting and disquieting mosaic – a collage made of life that reactivates meaning. Lost in Time is a lyrical meditation on time and its segmentation; about the strange perception and awareness of its nature. 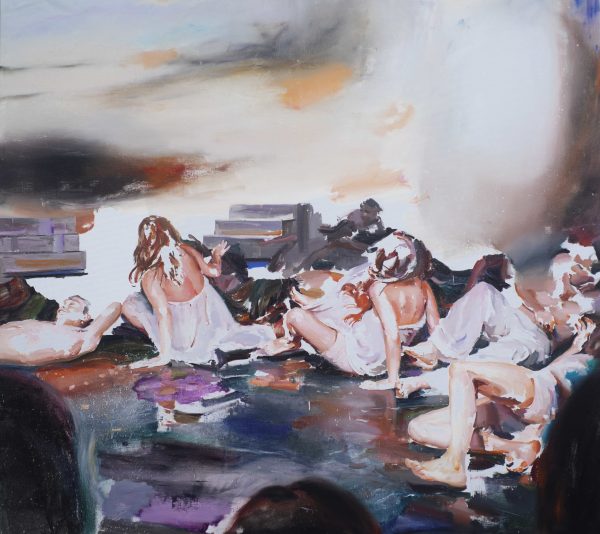 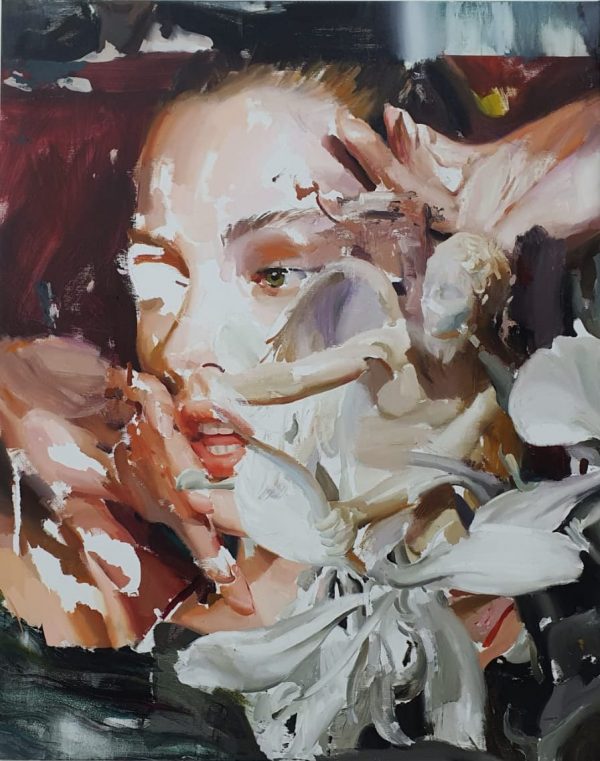 Ecstasy of the Perilous Journey, 2019 | Oil on canvas Pavel Grosu Her Beauty Never Fades Away, 2020 | Oil on canvas Pavel Grosu Behind the Light, 2019 | Oil on canvas Pavel Grosu Born in 1991 in Singerei, The Republic of Moldova.
Lives and works in Cluj-Napoca, Romania.

Pavel Grosu’s approach to painting is characterized by the prominence of the figurative, the preference for vague historical or social references, and the emphasis on the technical quality of the works, seen first and foremost as aesthetic objects. The artist deploys digital collage as a tool for building complex, carefully thought out compositional structures, later translated into paintings. In his newest series ‘Fragmented Dreams’, Grosu is challenging the many facets of representation through his often surrealist combination of elements. The fusion of contemporary human figures and ancient statues create an ongoing process of symbolism and signification, leaving the viewer in a state of wonder.

Pavel Grosu’s work engages with the topic of the fragmented or split reality in which we live. His paintings take as a starting point images from the media, being brought together as in a collage. He manipulates these media images in various ways to produce initial forms of digital collage: they are cut, juxtaposed, reshaped, blurred or inverted. By contorting them in some way, they confront the viewer with a rather confusing blend of visual stimuli – a disconcerting and disquieting mosaic.

Pavel Grosu was born in 1991 in the Republic of Moldova. He currently lives and works in the Romanian city of Cluj-Napoca, where he is doing a doctorate at the University of Art and Design. He recently had a solo exhibition at Sector 1 Gallery Bucharest and has shown works at the Five Plus Art Gallery, Vienna, Austria; Doris Ghetta Gallery, Milan, Italy; Boccanera Gallery, Trento, Italy, and Untitled, Miami Beach, USA.