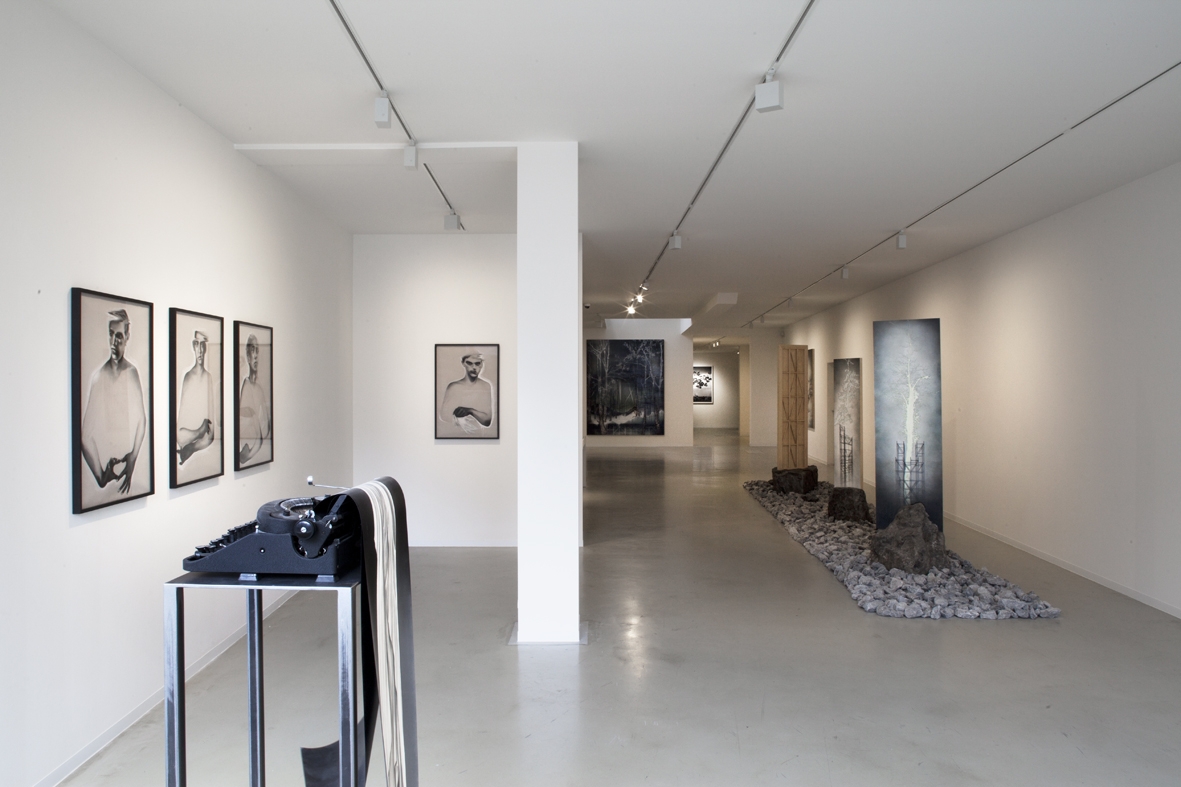 Galerie Ron Mandos proudly presents Here and Elsewhere, the third solo exhibition by Anthony Goicolea at the gallery. Here and Elsewhere includes new works by Anthony Goicolea created in 2014, drawings integrated into an installation context, as well as a selection of paintings. All works have one thing in common: they show a beautiful, enigmatic, but also somewhat elusive world that the artist conveys through various media.

Cornerstone of the show is the installation of a modified skype; a tradional seamless backdrop used in studio photography. On the enlarged leveled plane of the skype are music stands with drawings of young men and women veiling their faces behind white cloths in still, dramatic poses. The cloths are the only naturalistic elements while the heads are executed purely in contours and cross-hatching, alluding to old master drawings. Similarly, other drawings in a photo-realistic manner are lacking any figurative background, which would allow for narrative clarification. The streaky blurring and dripping contours could suggest a reference to both watercolor painting, as well as the manipulation of digital images.

Another series shows rear views of young men with grotesquely twisted arms placed before a black background, locating the image in a somewhat surreal and bleak, romantic context with references that are difficult to pinpoint. One of the large landscape drawings shows a slightly oppressive night scene of a snow-covered forest, the inherent darkness of which is disrupted by searchlights. In the foreground of the picture we see intertwined tree trunks, permitting a view of a metal construction, which could create the impression of a stage design, would the tree line not continue beyond the man-made structure.

Goicolea’s works – displaying a mastery of various media – subvert the expectation and visual experience of the spectator. Rarely are things as they seem, even at second glance, and figures and landscapes continuously elude unambiguous interpretations and categorizations. This playful handling of both content and medium is the common thread that runs through Goicolea’s work. He achieved fame with seductive photographic arrangements of a gay Jeunesse dorée underpinned by inscrutable, cryptic layers of meaning. His artistic staging of the familiar search for identity, replete with media ambiguities, questions the reliability of his visual narration.

Both his early photographs and later videos, as well as his current landscape drawings are marked by an elaborate composition and in their lonely austerity recall the sublime landscapes of Classicism and early Romanticism, yet via the constant insertion of unexpected elements are simultaneously placed in the present, located just barely outside of a tangible reality.

This oscillation between fact and imagination, fictive past and only just conceivable reality has a biographical link to the artist’s family history. Goicolea was born in 1971 in the US to Cuban expatriates and therefore has an extensive ancestry, which he only partly knows and which comes from a country that he has only visited once as a tourist. 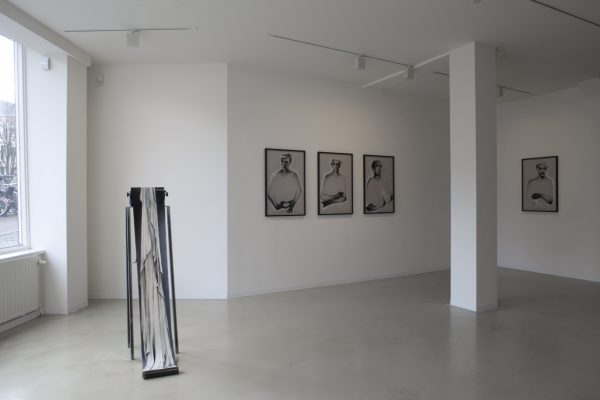 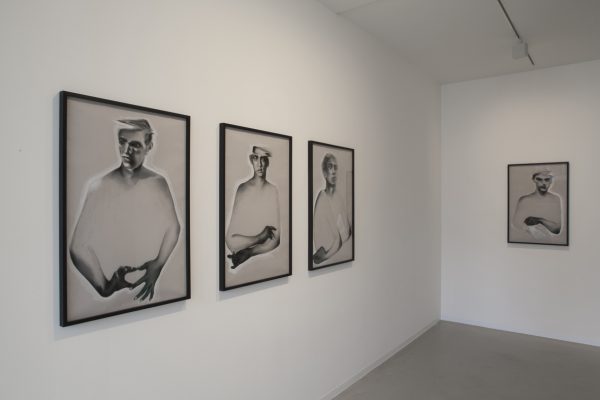 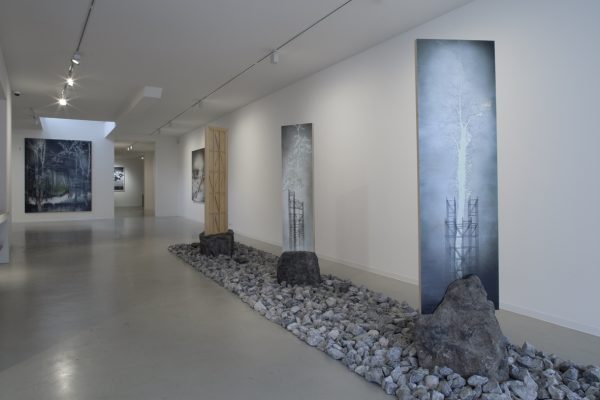 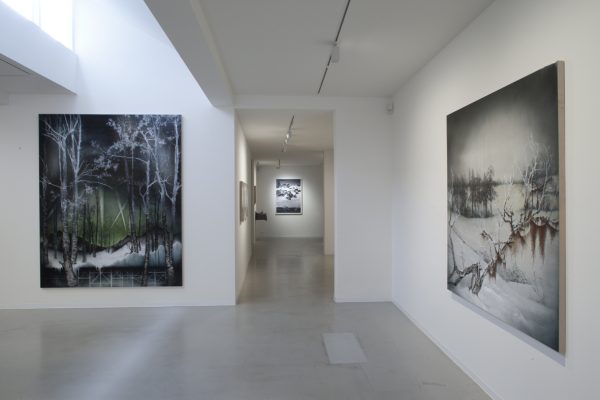 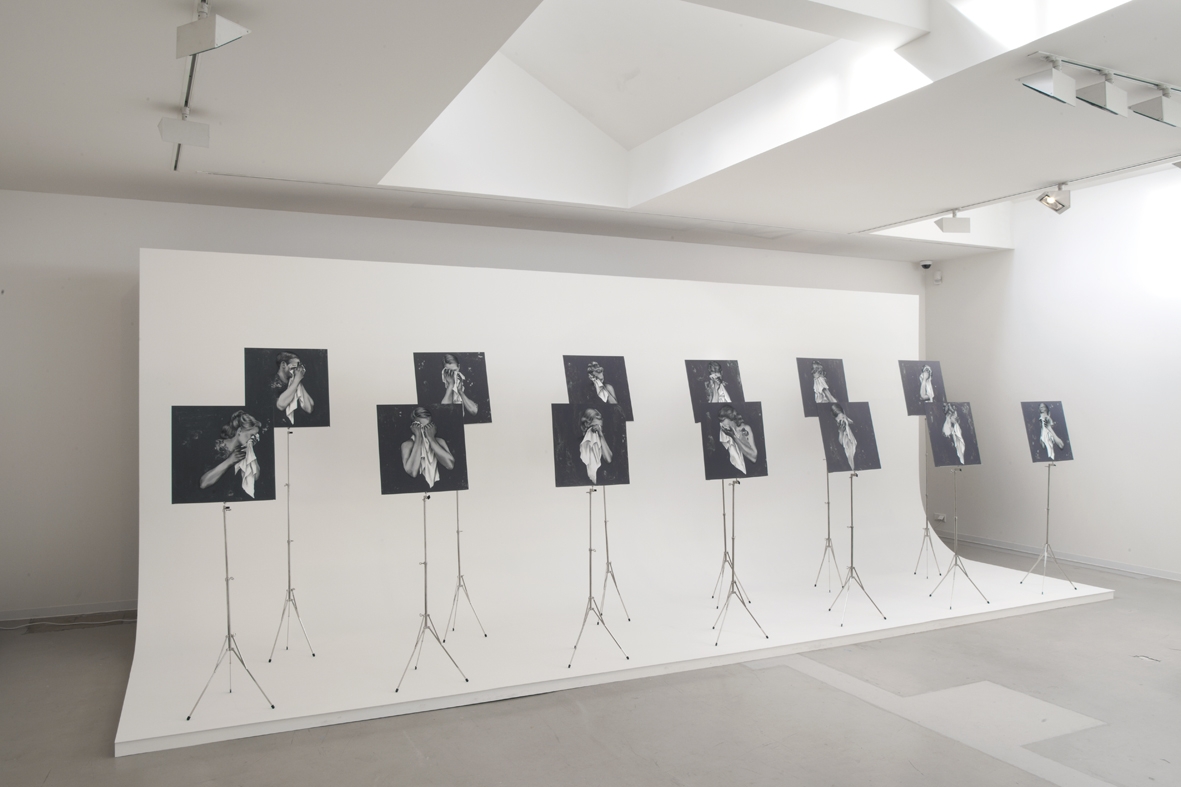 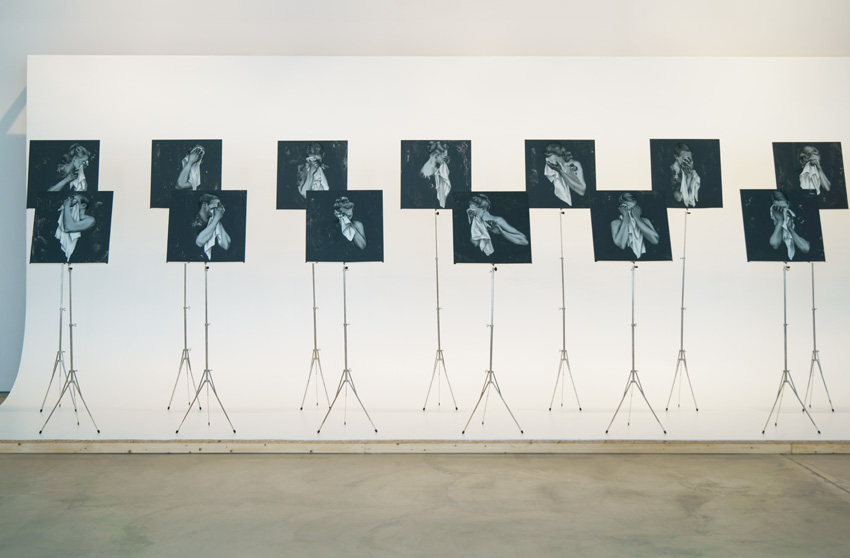 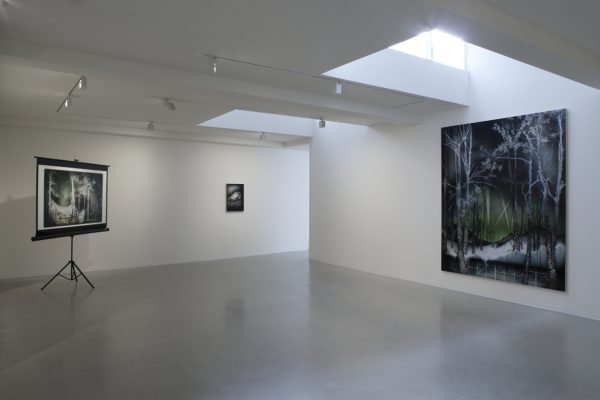 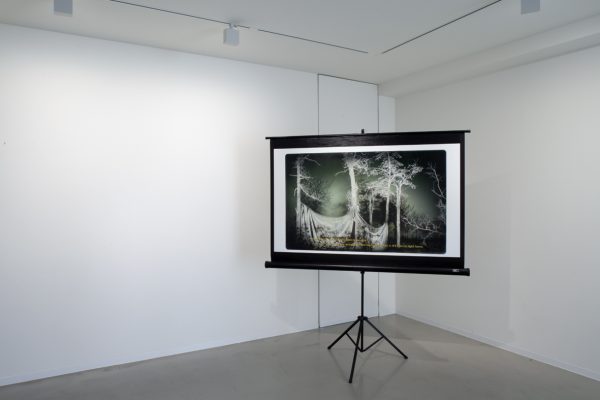 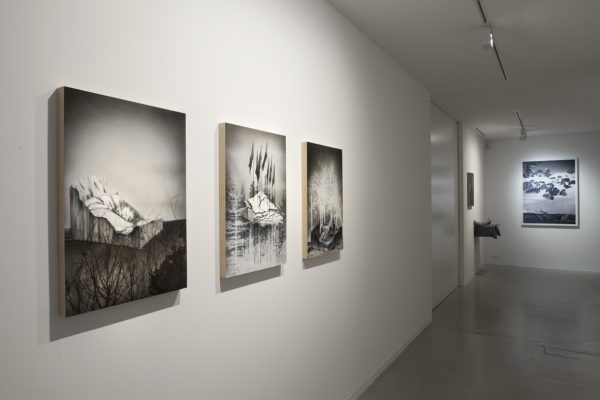 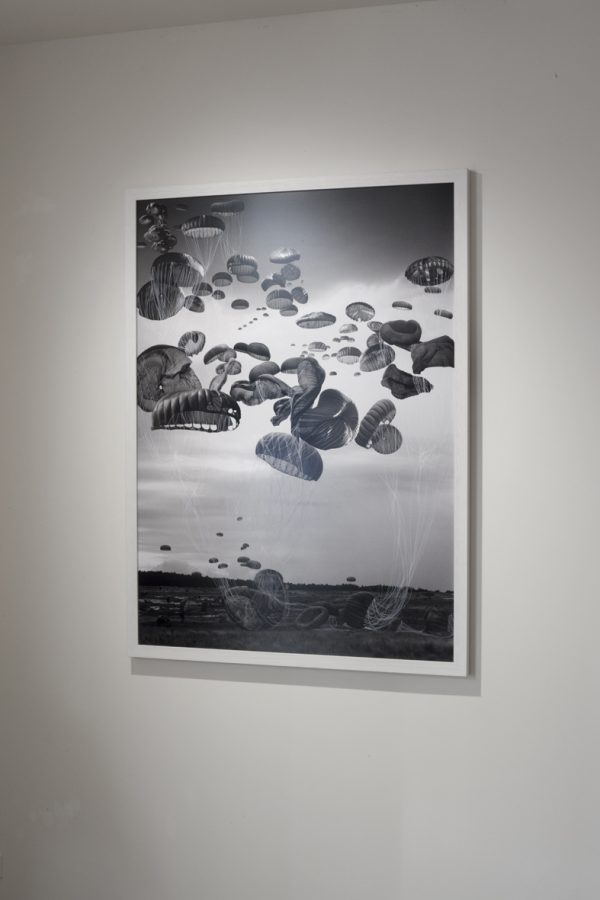 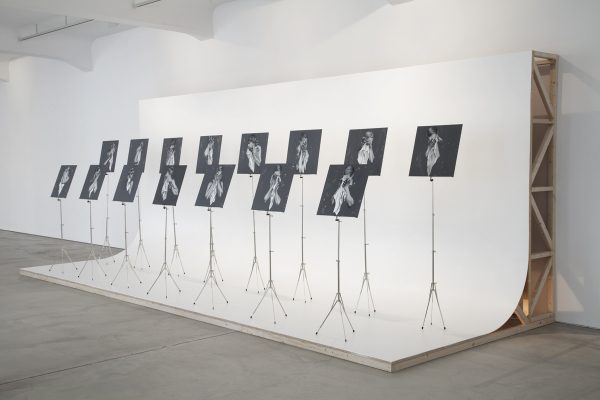 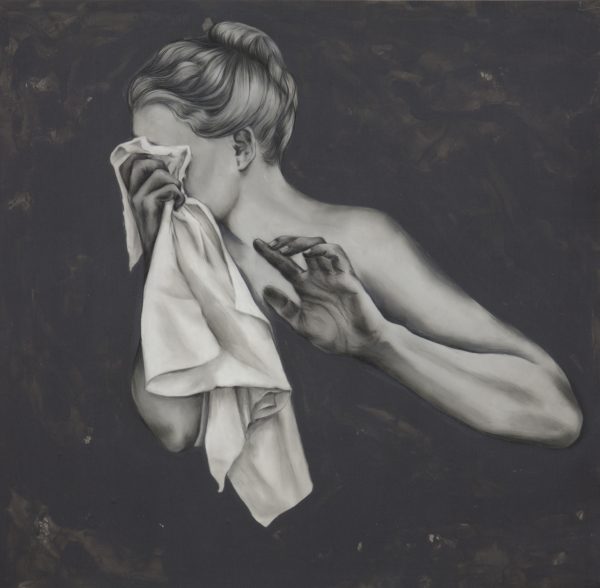 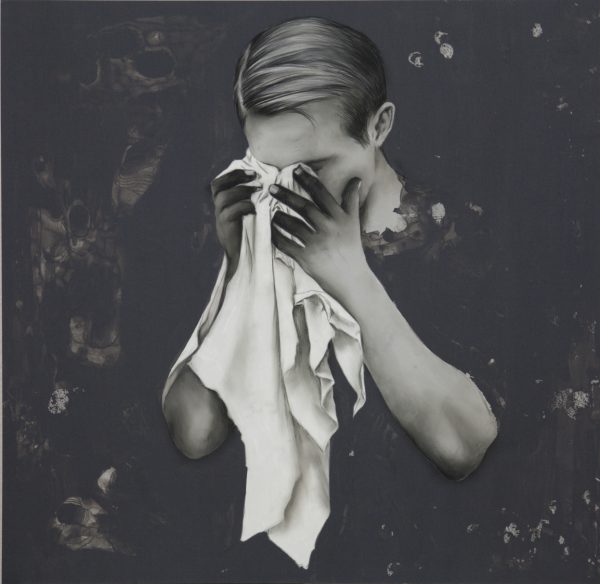 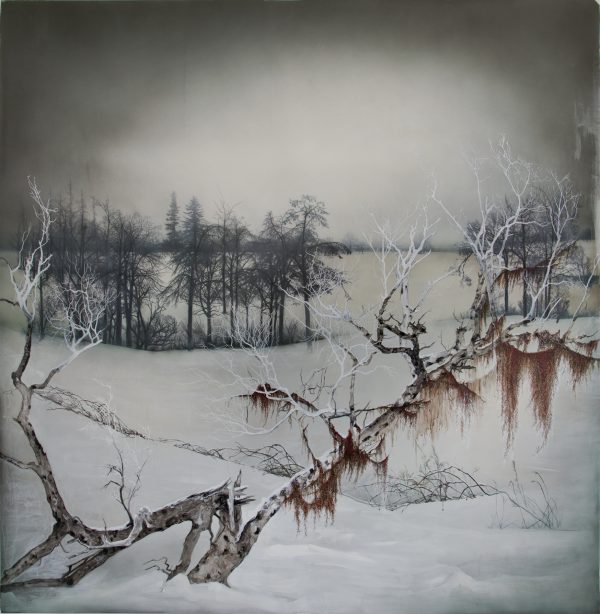 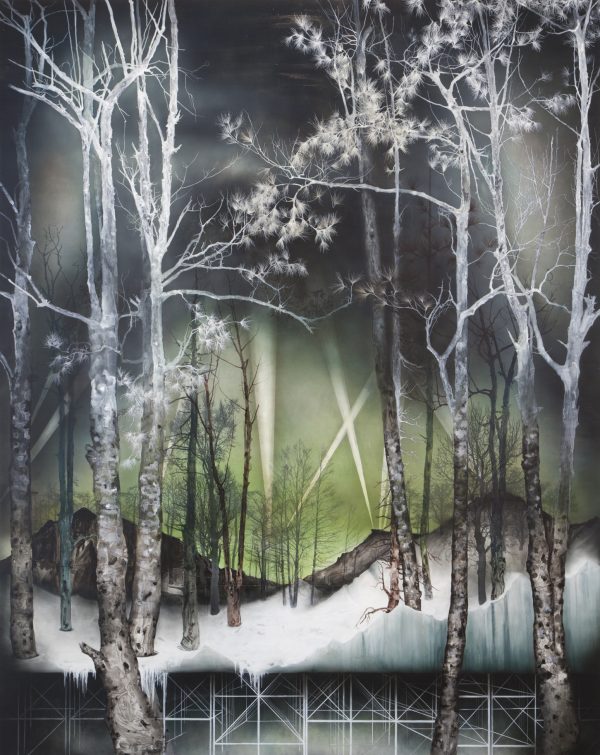 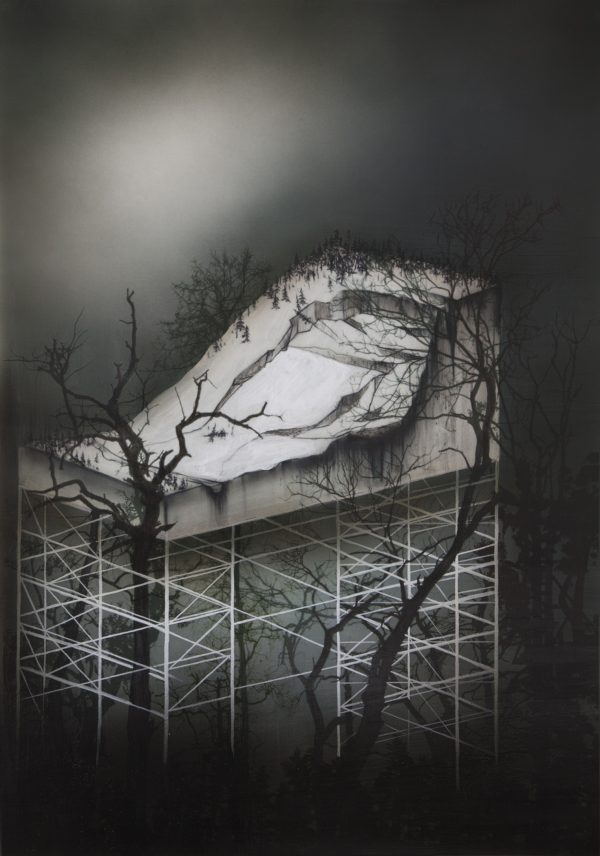 Cross Section IV, 2014 | Acrylic and ink on mylar mounted to board Anthony Goicolea 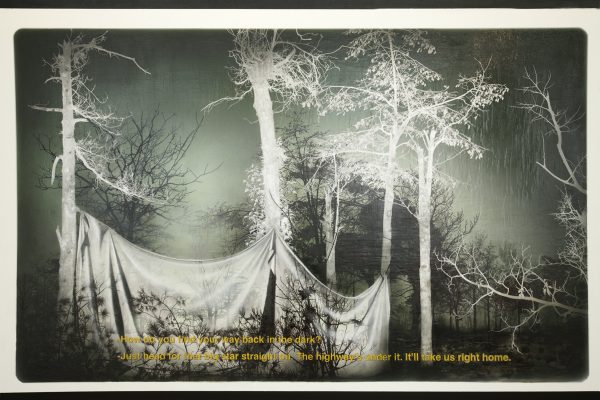