During Art Rotterdam 2016 Galerie Ron Mandos presents an exclusive presentation of Art History Is Not Linear (Boijmans) by the international acclaimed artist Ryan McGinness, at Rotterdam’ newest venue ‘Het Industriegebouw’, just a twenty-minute ride away from the Van Nelle Fabriek.

Het Industriegebouw
Het Industriegebouw can be seen as a typical architectural icon of the reconstructioning of Rotterdam after its destruction in World War II. Realized in a post-war Rotterdam, it is designed by the legendary architect Hugh Maaskant in collaboration with Willem van Tijen. Het Industriegebouw comprises 20,000 square meters of space and accommodate different organizations from start-up to creatives and high-end retail to hospitality services. The building has a recognizable U-shape. The U ends at the Achterklooster with five low ceiling, large spaces. The building is intersected by a service road parallel to the Goudsesingel. On the top floor modern lofts are being realized. Het Industriegebouw is located in the trendy Hoog Kwartier area; situated between Oostplein and the Markthal.

ART HISTORY IS NOT LINEAR (BOIJMANS)
Especially for Art Rotterdam 2016 Galerie Ron Mandos turns back to its roots in Rotterdam in collaboration with Het Industriegebouw, with an exclusive exhibition of Ryan McGinness 's Art History is not linear. For his ongoing Art History Is Not Linear series, Ryan McGinness (USA, 1972) dives into museum collections from around the world in order to document their artworks and objects into his own work. In 2014 he created these Boijmans series for which he made two hundred sketch drawings based on two hundred objects from the permanent collection of the Museum Boijmans Van Beuningen in Rotterdam. The gesture of creating these paintings forces the museum’s collection to fold in on itself. McGinness distils the museum’s collection down to individual units of meanings (symbols) and then rebuilds it in nine new works. Especially for Art Rotterdam five of them are being showed at the Industriegebouw and others can be seen at the fair, in the Galerie Ron Mandos booth.

Ryan McGinness has always been interested in logos and symbols. From an early age on he noticed what these symbols could do and how the system of branding functioned, which ultimately led him to studying graphic design. The basis for his iconic large-scale images is hand drawing deriving from everyday (consumer) society, which he ultimately transforms into digitalized homogeneous symbols and icons that can be reproduced and replicated infinitely onto any surface. McGinness creates a world that consists of its own vocabulary of symbols, all juxtaposed next to each other. These symbols together do not have a clear narrative, giving the viewer the possibility of multiple subjective interpretations. Coming from a generation of artists who were influenced by typography, graffiti, pop and commercialism, McGinness’ work consistently surprises the viewer with their colorful arabesques and baroque beauty, oozing with their own personal language. 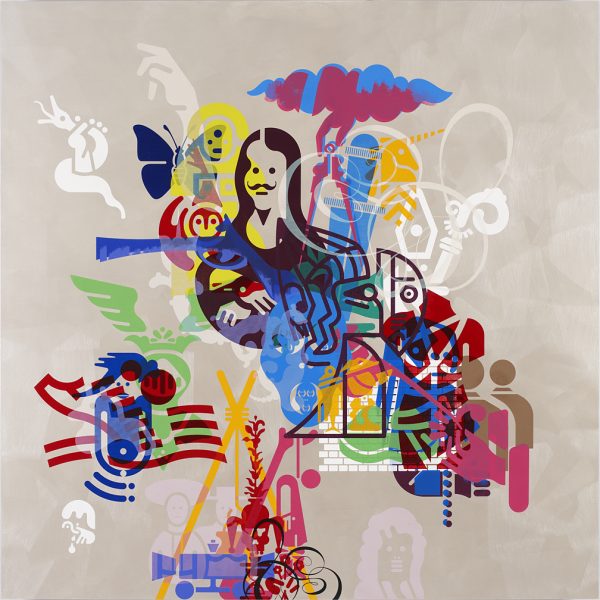 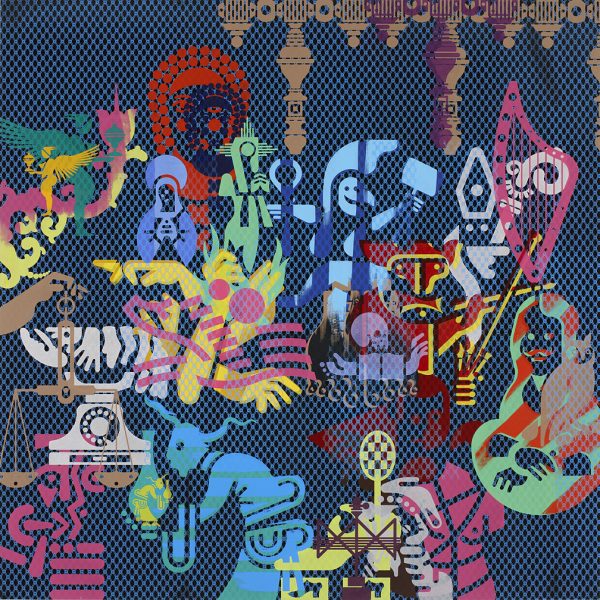 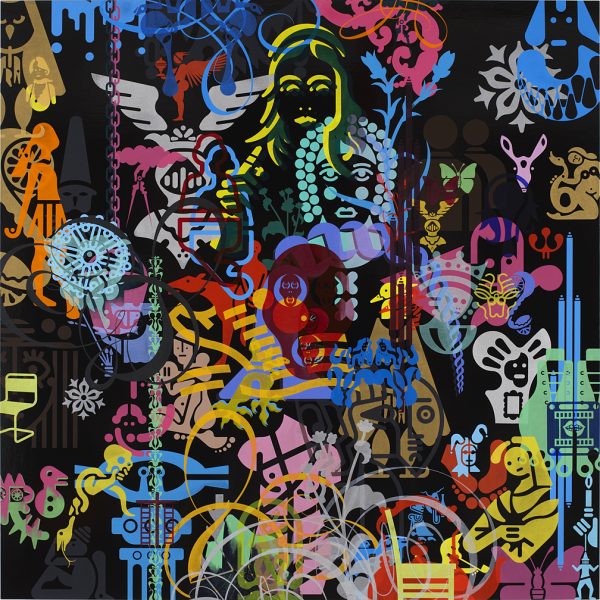