On show In his new film, Hans Op de Beeck (b. 1969 in Turnhout, Belgium) employs puppets for the first time and affords the curatorial theme of the "red thread" with an interpretation derived from Asian mythology. A Chinese proverb says that an invisible thread connects those destined to meet, despite time, place and circumstances. The thread can be tightened or tangled, but will never be broken. Taking this clear and simple metaphor as my starting point, Op de Beeck created a video as a visual love poem about a punk girl and boy who grow old together. Love and death here go hand in hand. The film refers both formally and thematically to the traditional Japanese Bunraku theatre, where black-clad puppet masters operating large puppets perform a tragic (love) story. The work continues the artist’s exploration of contemporary society’s complexities and universal questions of the meaning of life and mortality.

About the artist Hans Op de Beeck studied Fine Arts at St Lukas College in Brussels and took part at the post-graduate program at the Higher National Institute for Fine Arts. Later he worked in connection with the Rijksakademie for 2 years in Amsterdam. Op de Beeck won the prestigious prize for Young Belgium Artist and in 2003 took part at the PS1 project in New York. He became known instantly with a model he created during his time at the Rijksakademie: a crossroads with traffic lights at night. This work is typical in its dealing with a recurring theme of his, that of alienation in modern life and the superficiality, monotony and miscommunication that accompanies it. The situations that Op de Beeck highlights emote atmospheres of deep desolation en emptiness. A couple has a drink at a cafe without uttering a word to each other or even glancing at one another. A long line of bored till workers sit twiddling their thumbs in a deserted supermarket; not one customer is to be seen. Desolate ruin landscapes remind one of human activity, but it seems that these people must have died off a long time ago. This is modern life as Op de Beeck presents it: a sinister no man´s land, where there barely seems place for people. The artist is not interested in moralizing or even making a value judgment: ´I see such situations as absurd bits of information. As an artist you are able to present them. It is a human inability to grasp the reason for life, but it is possible to, in certain ways, touch upon it.` His spatial works, videos and photos of many different scenes of everyday life are all deconstructions. His representations rip scenes from their original context so that their reason for existence at once becomes disputable. His videos for example are fragments from everyday life, but have been enlarged to such an extent that an alienating image emerges. The same goes for his life size models. It is just these uninteresting spaces, such as an unremarkable housing estate, or an empty cross roads with traffic lights at night that he rebuilds in every exquisite boring detail. However by omitting certain small elements his representation gain a bizarre character. Op de Beeck is very subtle and also somewhat romantic. It is not just the high degree of care he takes in carrying out his work, but also his focus on small, often unconscious actions: a look, a silence, a gesture, a symbol etc. that, apart from alienating, also evoke something quite enchanting. The recognition and the compassion, or even the memories these representations conjure up in the viewer, strike very close to the bone. His inspiration comes often from personal experience: such a ´Determination 1´ of the boy that stares back at you from the back seat of a car, or ´Determination 4´, the rushing family that never gets anywhere. GEM housed in January to March 2004 the first solo exhibition in Holland of the Flemish artist. He received international acclaim for his unique works in diverse media such as video, drawing, photography, sculpture and installation. Aside from a brief synopsis of his oeuvre, Op de Beeck presented large new installation he created specifically for GEM. With the help of 2 assistants and 15 students from the King´s Academy of Fine Arts he build his largest installation to date. In an area of 11 by 21 metres, Op de Beeck build a Flemish style motorway restaurant in monochrome tints that could be accessed by the viewer.. When taking place in the restaurant, there expands from the other side of the restaurant window, a night time motorway scene, with the road seemingly stretching out over an infinitely long distance, finally disappearing into the horizon. In turn this installation becomes the backdrop for a number of new video pieces. This installation was designed and completed in 3 months under supervision of the artists in a hanger in Scheveningen. 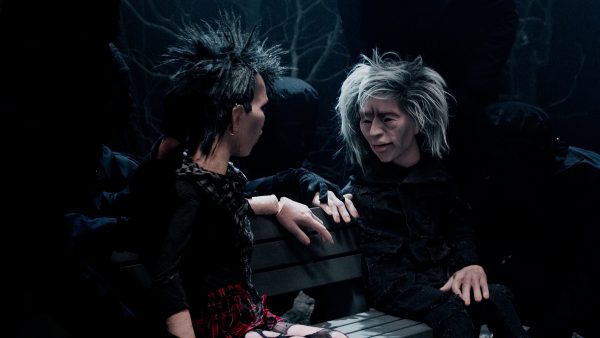