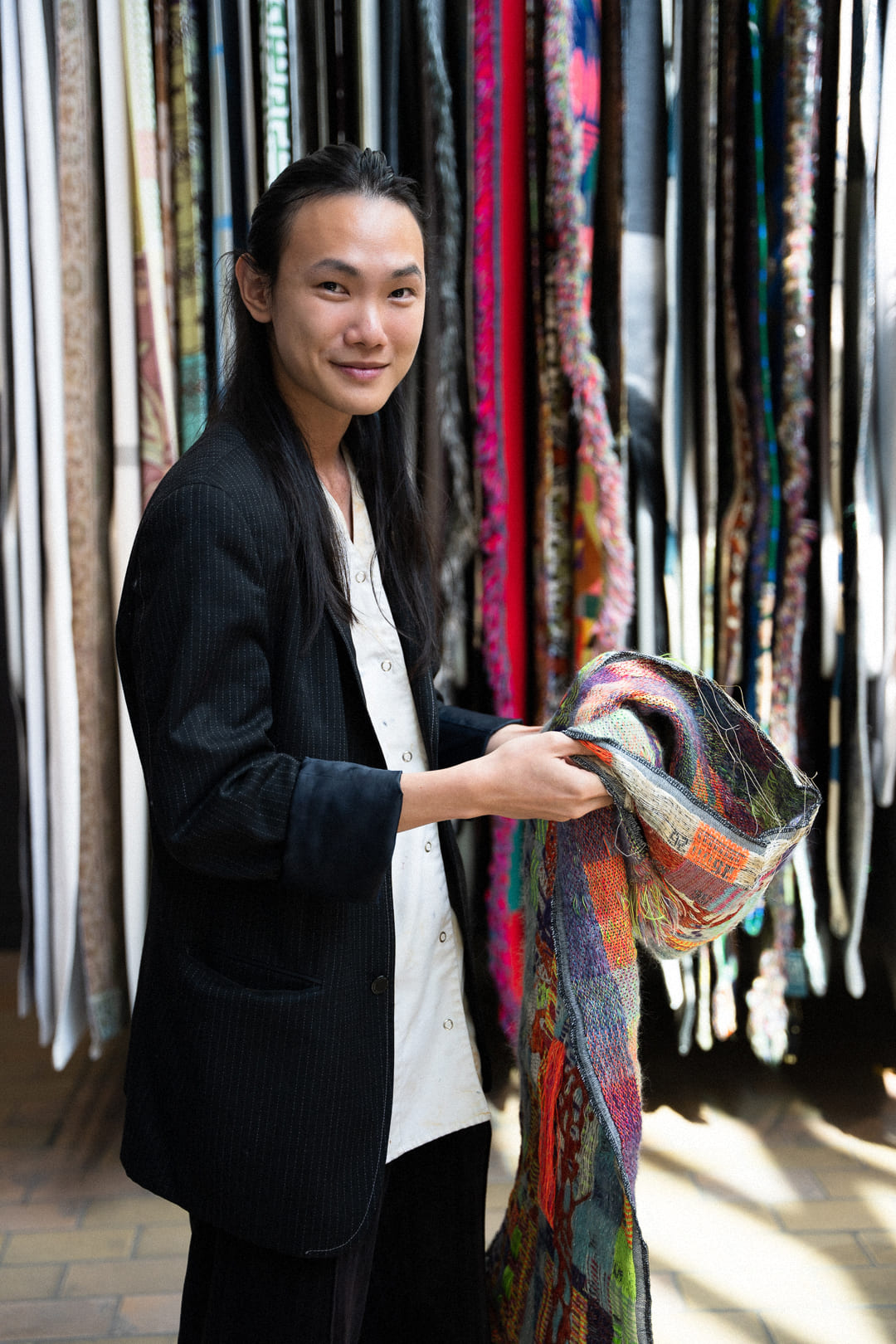 Marcos Kueh is the winner of the Ron Mandos Young Blood Award of 2022.

Kenyalang Circus (2022) embodies Marcos Kueh’s search for a critical stance to the neoliberal fetishism of “icons”. With this project, Kueh highlights the use of visual iconography in advertising through the lens of graphic design and visual art. Extrapolating from his roots from the Malaysian side of Borneo and the island’s commodification and exotification as ‘Malaysia’s exotic unknown’ ‘the land of the orang-utans’, Kueh questions the significance of post-colonial independence which resulted in a forced position of role-playing into the expectations of the West. Highly dependent on the tourism industry, combined with the traces of the colonial past in neoliberal society, Borneo now finds itself on a slippery slope between the need for commercialization through sensational marketing of its local culture, and the desire to hold on to traditional practices and values. Kueh attempts to explore how these contradictions can fit in contemporary life, and addresses the island’s internalized exotification. 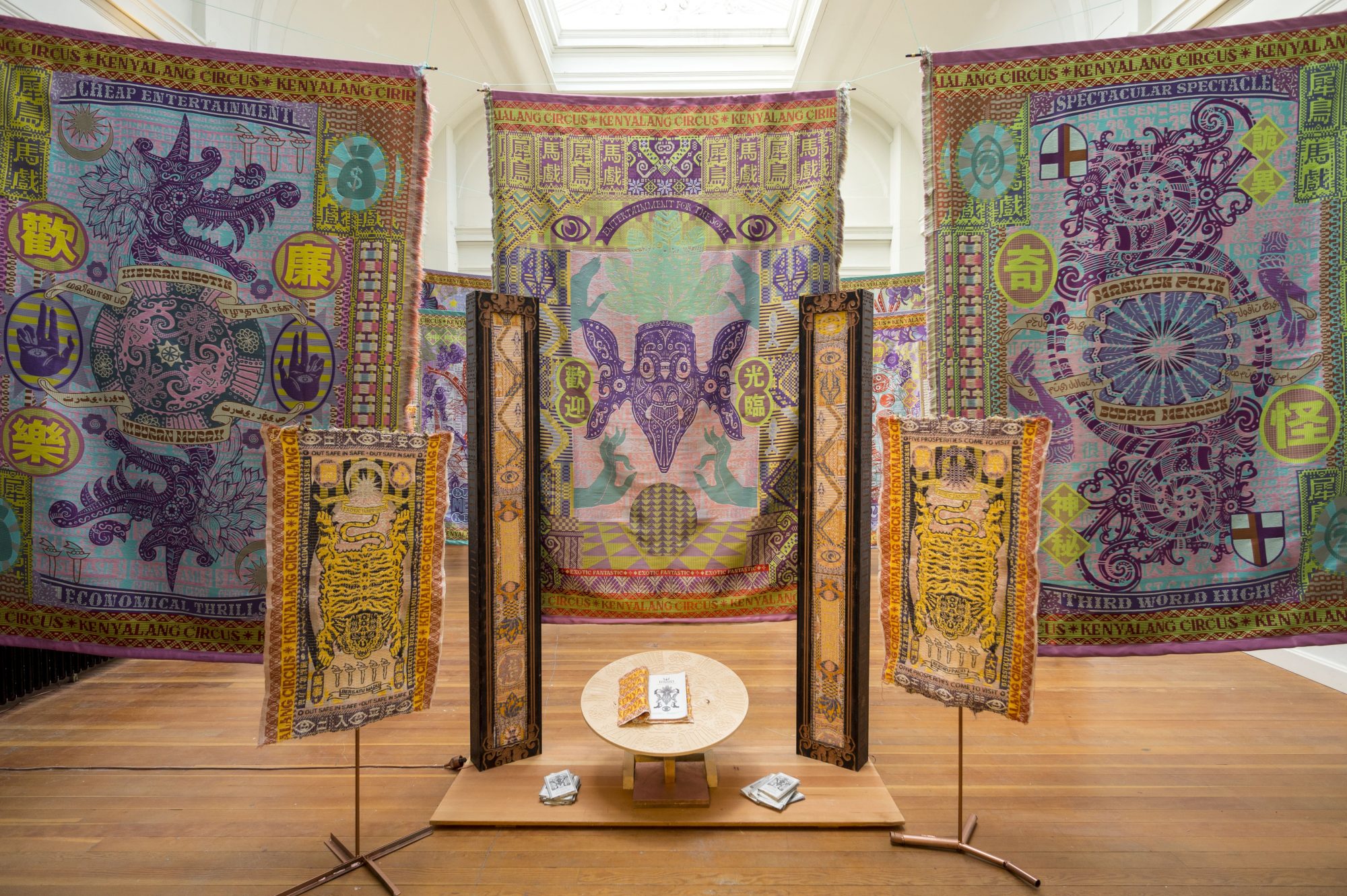 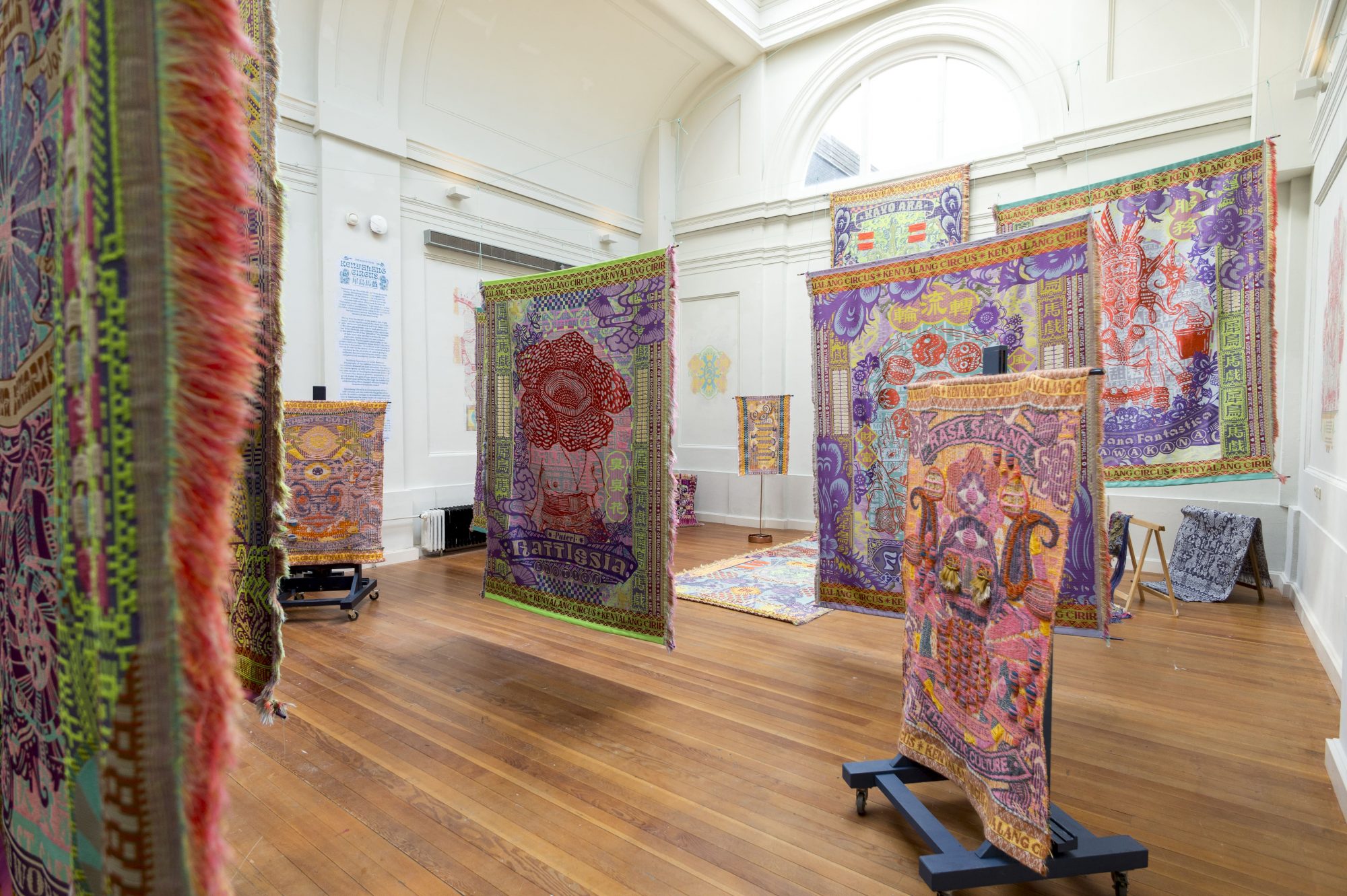 Kenyalang Circus, translated as ‘Hornbill Circus’ from Sarawak Malay, consists of a series of eight woven textiles in the form of advertisement posters of which four are presented in the gallery. Kueh’s woven advertisement posters are indicative of his laborious background from a developing country. A stark contrast to contemporary advertising where things are often either literally or metaphorically disposable. Figures of mystical beings are woven in the textile, where they are frozen in time and forever on display, in extremely saturated colors that demand for your attention. A closer look uncovers uncanny details, such as buckets and rags, and elements of text that hint at poverty, oppression and greed.

Kueh has a background in graphic design and advertising, and a journey through Borneo to document traditional weaving methods started his fascination for to understand his native visual languages, as well as developing a strong attraction to their material properties. Before the arrival of painting tools, the natives of Borneo encapsulated their myths and stories in their textiles. Kueh’s practice is a speculation of what this act of myth weaving would look like in the contemporary – what stories do we take the time to encapsulate and why? In turn, Kueh hopes to empower other South-East Asians to reevaluate the meaning and power behind their identities. 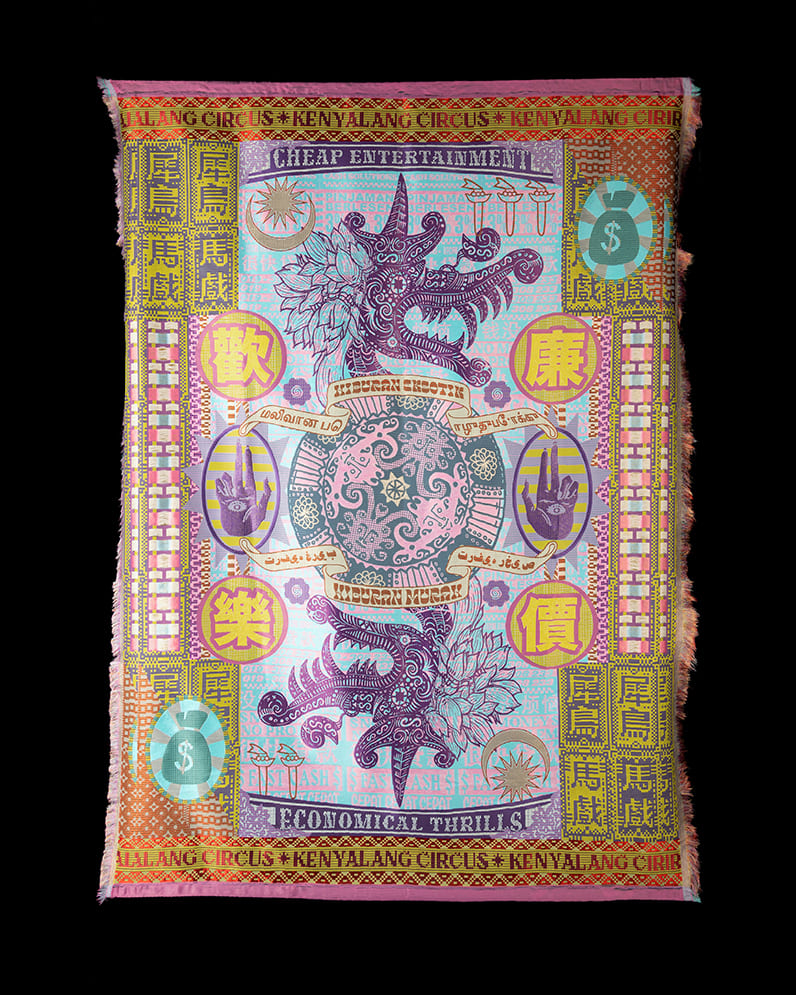 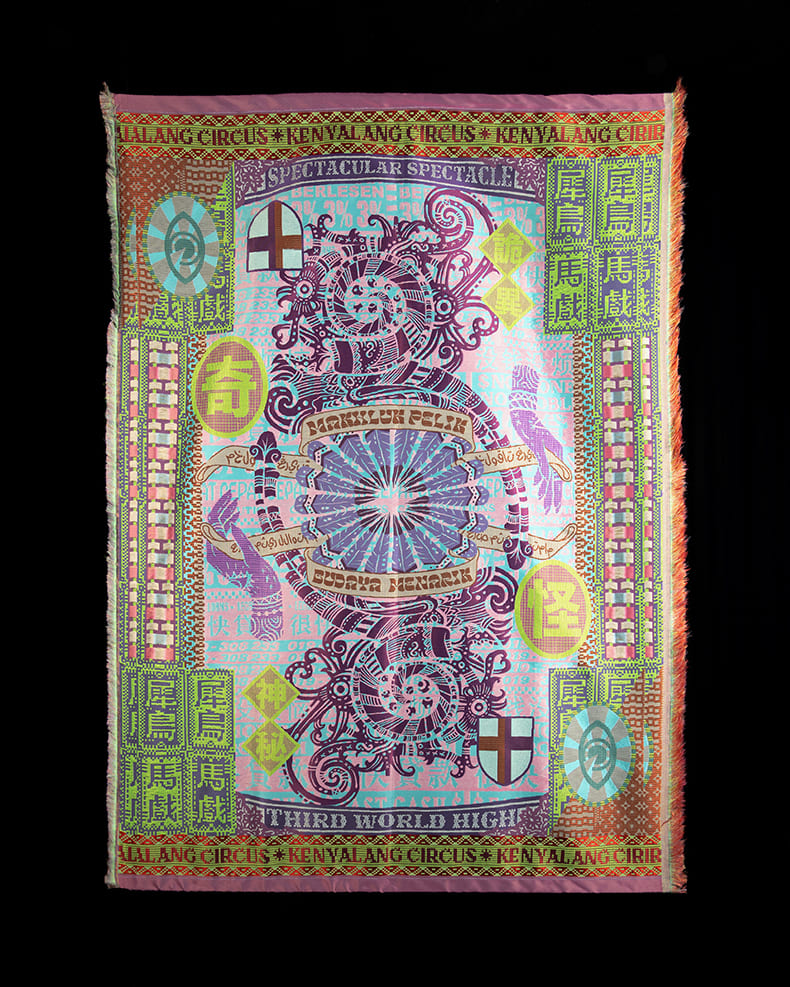 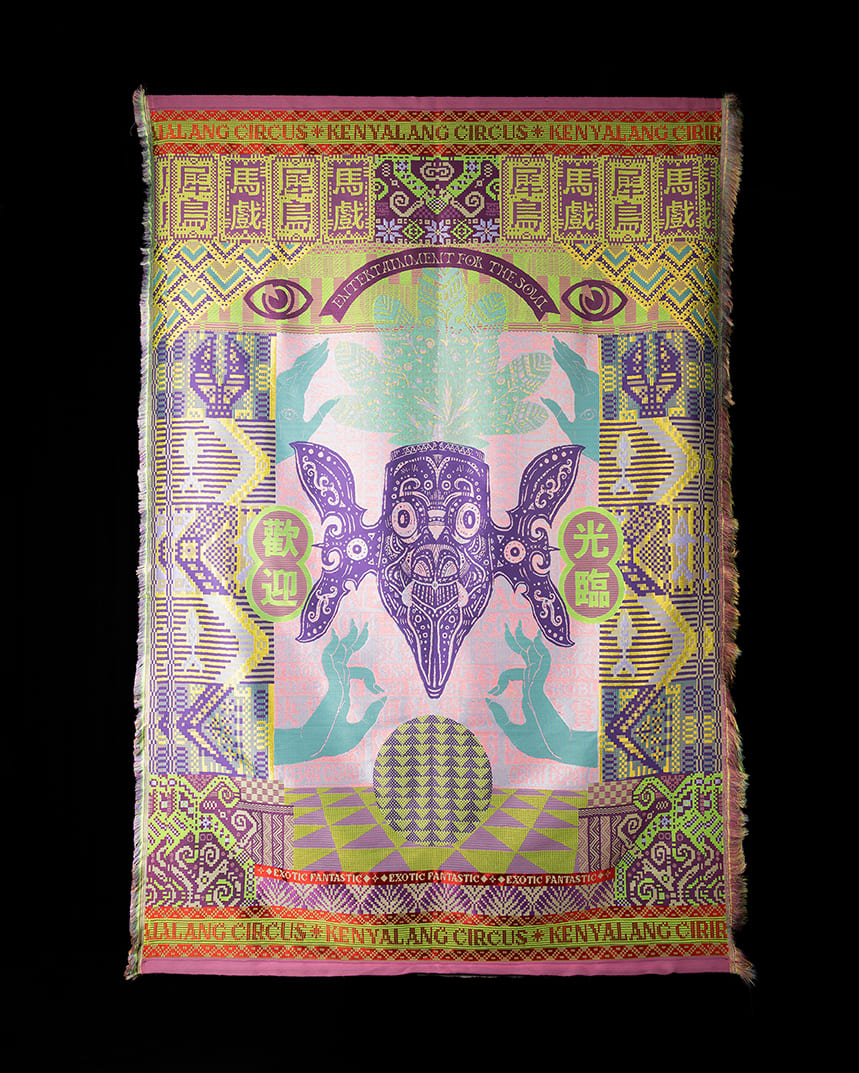 In Kenyalang Circus, the many layers of complications that are interwoven in Borneo’s perception of the self are deconstructed, untangled and re-fabricated. It is an attempt to disturb the expectations and histories written by oppressors. An emancipatory power radiates through these diasporic stories that are woven into the textiles. In a world that is shaped by advertising, Kenyalang Circus is a contemplation of self-worth and authenticity, balancing between the traditional and the contemporary.

For inquiries into the works by Marcos Kueh, click on one of the buttons below: