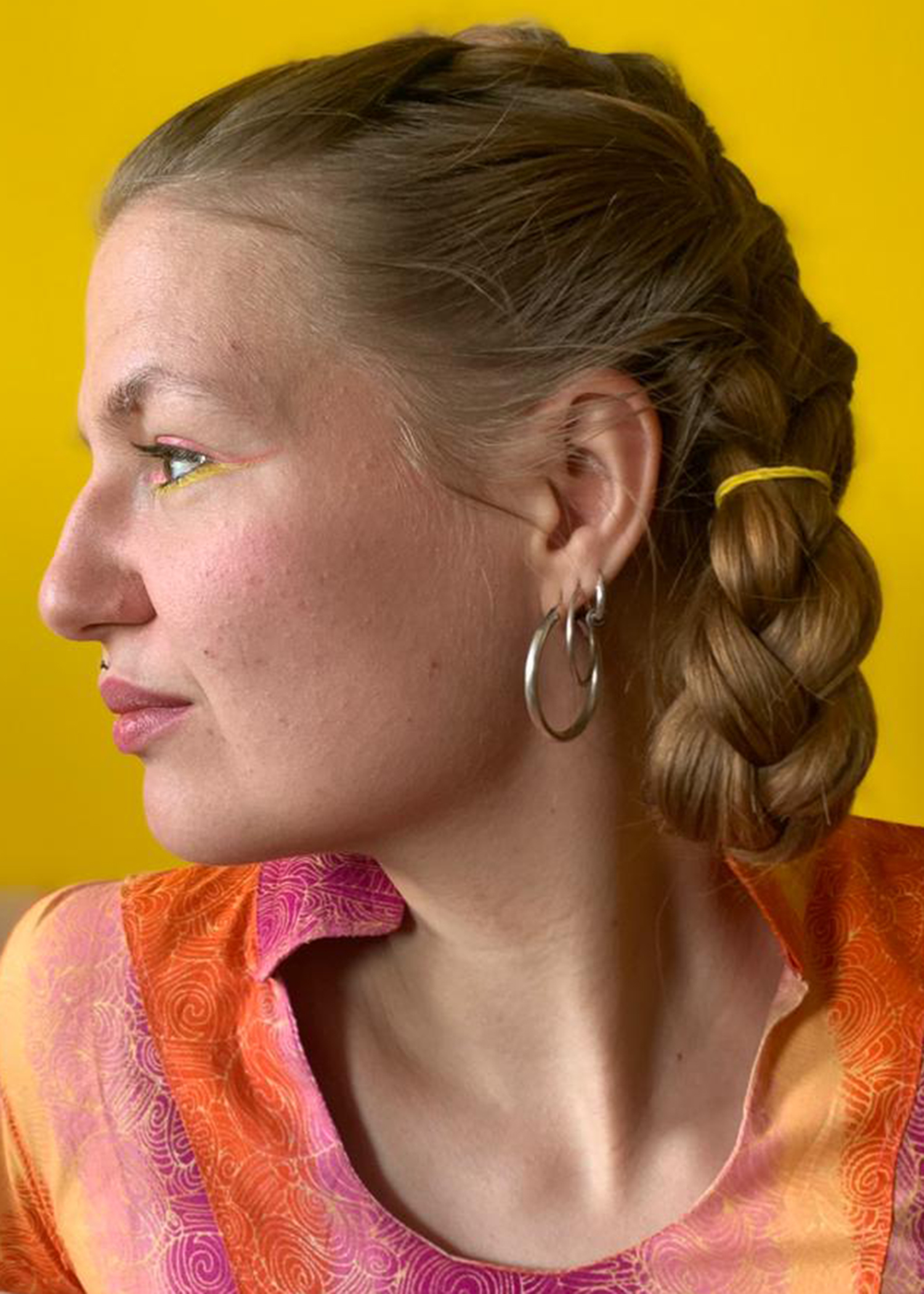 Using my own body as a starting point, I interact with the world around me. I am fascinated with the concept that one can create and re-create oneself through actions and so with my body make spaces into being.

In my artistic practice I see myself as a collector of a sort, a story teller documenting parts of daily life that are often overlooked. In my work I wish to interact with the mundane and to question its existence and its structures, and then I try to approach it all with a playful attitude in order to highlight the absurdity of life.

With my graduation work I hope to give others a glimpse of the fascination and beauty that I see in the public sphere, and the power of everyday acts to inspire others to approach the public as a space of possibility. The public sphere has become a returning interest for me: the space in between private and public, human interactions, social behavior and the performative element of day to day life.

To me there is poetry living in public spaces, as there is poetry and power in mundane habits of everyday life. A bridge is a bridge is a bridge is a bridge; repetition strengthens the object, the act creating rhythm which then creates a new abstract meaning to appreciate. What if it is possible to push the borders, to break the pattern or for just a brief moment interrupt everyday life in hope of creating new possibilities? In my series of public performances ‘Call to the City’ I try to gently push existing structures in the hope of making ripples and creating small reactionary patterns of curiosity.

With my graduation work I hope to give others a glimpse of the fascination and beauty that I see in the public sphere, and the power of everyday acts to inspire others to approach the public as a space of possibility. 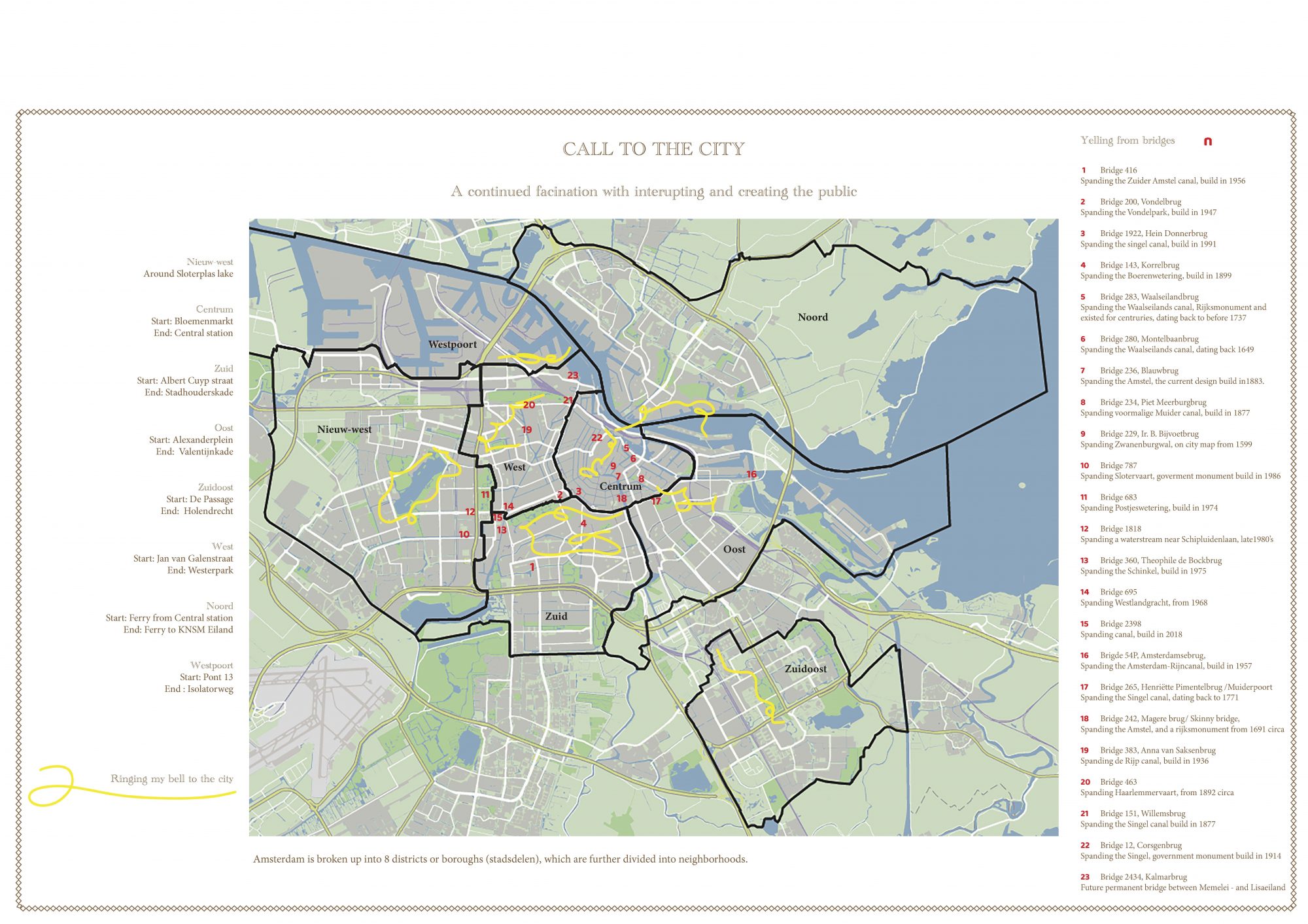 Yelling from bridges is a performance from spring 2022 evolving from my thesis ‘Primal beings in domesticated spaces’. The work is about claiming my space in the city, culminating from my research on Urban public space and performativity. It is about the unspoken laws that we obey in public, about how we as humans are domesticated into these spaces and so are not allowed to express many primal emotions in the public sphere. I claim the bridges as a liminal space in the city and I made a wooden step chair to step up on as a tool referring to soap-box public speaking. I yell to the world to interrupt the city in the most direct way and to break with my own boundaries of how I am supposed to behave in public. It became an outcry, a manifesto for re-claiming one’s existence in our urban environments.

The video is cut from each bridge to fit the text that I am yelling. Although I am yelling, trying to express myself fully and give in to the raw show of emotion I normally would hide from the public, my yell gets muffed by the city, and in the end, one can’t fully make out what I am trying to say. I added subtitles to still make the text available in the video work, but in the pure public performance my voice was ultimately lost in the city. A poetic twist that ads a certain loneliness to the scene. And it asks the question; if one can ever fully be understood?

In the installation the stool is present on the side, as a break from the distance one can feel from watching the video to make a connection with the viewer and show that it did happen. To active the stool, I place a small text just out of reading reach, so that a viewer would have to get up on the stool to access it.

“A bridge connects 2 sides making a liminal space; A platform with multiple functions.
A space of history,
A space of memory
A space of meeting.
And a space of moving, as its pure existence is based on the act of crossing it.

I stand on it,
heigtening my body with my wooden stool,
I yell to the world.”

‘Ringing my bell to the city’ is a performance from 2020, during the first lock down of the pandemic. Feeling a deep urge to connect with people in that highly absurd time, I created a glass bell and an outfit inspired by both current and former pandemics and walked the streets of Amsterdam in an attempt to perform for the street and ‘call’ to the world.

I walked 8 mornings in the 8 districts of Amsterdam, and I created corresponding postcards, each with its own silly greeting mimicking holiday cards. The sound is a soundscape of the glass bell mixing with the sounds of the city, and edited to not fit the video on purpose, as to add another layer of distance I feel corresponds to the alienation experiences of life during the first months of the pandemic. Both video and audio loops, to create a hypnotic feeling as the viewer is taking on a walk through Amsterdam’s empty streets – in the very beginning of a pandemic which is still ongoing.

For inquiries into the works by Sveske Ourø, click on one of the buttons below: